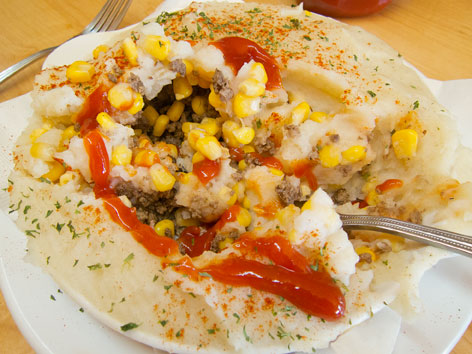 What: For something as simple as a local take on shepherd’s pie, the Montréal dish called pâté chinois (“pa-tay cheenwa”) sure has a confusing name. Chinese pie? There’s a nice oral legend about Chinese railway workers introducing this dish to the French-Canadians—and a more likely counter legend (brought to our attention by Shut Up and Eat) that the French-Canadians fed it to those Chinese laborers—but there’s actually no verified explanation for the name.

No matter, the dish is 100% Québécois these days, more of that hearty, dirt-cheap peasant food that probably once fed lumberjacks and is a source of childhood nostalgia for many a Montréaler. It consists of ground beef, corn (sometimes kernels, sometimes creamed corn), and mashed potatoes, layered from the bottom up with perhaps a sprinkle of paprika on top. It’s commonly eaten with ketchup—homemade, if you’re lucky.

Order: The pâté chinois ($8.95 for plate; $10.95 for complete meal, with coffee, pea soup, and pouding chômeur) is, quite accurately, large and hearty here, and made as simply as it’s meant to be: ground beef, corn kernels, mashed potato, paprika. It tastes good and fresh, though some ketchup and Tabasco do help in the flavor department (unfortunately, it’s Heinz ketchup, unless you’re here during tomato season in the fall, when La Binerie has homemade ketchup maison). It’s worth noting you save some calories with this kernel-corn, rather than creamed-corn, version, so feel free to follow up with a delectable dessert, like pouding chômeur or tarte au sucre.

Alternatively: In the Latin Quarter, the well-reviewed Restaurant Mâche (1655, rue St-Denis, map) offers six kinds of pâté chinois, from the traditional to an all-veggie and bean to those incorporating merguez sausage or pulled pork and bacon. For a fancier (and pricier) take, try the duck confit pâté chinois, with homemade ketchup aux fruits maison, at Vallier (425, rue McGill, map).