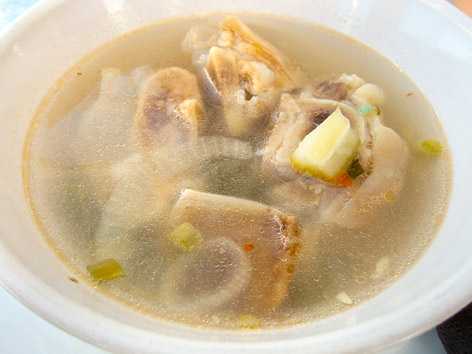 What: Popular around the Caribbean, souse is a light dish, served cold, of pickled pig trotters (and often other parts of the pig) in a clear broth, flavorful with hot peppers, lime, onion, garlic, and other seasonings. Regional variations exist, but from what we could tell, on Antigua souse is more like a soup than a ceviche-like dish (as it is prepared elsewhere). The fatty meat is typically cooked first to tenderize it, then it's marinated in the seasonings to become pickled. Souse makes a great appetizer, and like other traditional Antiguan foods, it’s most often eaten—in homes and in restaurants—on Saturdays.

Where: We found our souse on the Saturday local-food menu at Russell’s Bar & Seafood Restaurant (268-462-5479 or 268-726-5242; Fort James Beach), picturesquely perched above the entrance to St. John’s Harbour on historic Fort James, within eyeshot of the site’s centuries-old cannons. The building housing the restaurant was restored by the late Russell Hodge in 2005; today his daughter Danielle presides over the venue. The terrace, with its wide, open swath of blue sky and turquoise sea, is the place to park yourself with a rum punch on a Saturday afternoon (see this user photo for proof).

Order: There are lots of good things to choose from here, particularly on a Saturday when traditional foods (conch water, seasoned rice, rice pudding, salt fish cakes) are served. (Otherwise, expect a Caribbean-inspired seafood menu, including conch fritters, Creole snapper, and whelks in white wine.) At the chef’s insistence, we tried the souse (15 EC) and were not disappointed. The cool broth, studded with green and red peppers, sliced onion, and garlic, was incredibly well seasoned—drinkable even!—and the meat was tender, a little fatty, and full of porky flavor.