<< back to foods in Nassau, New Providence Island 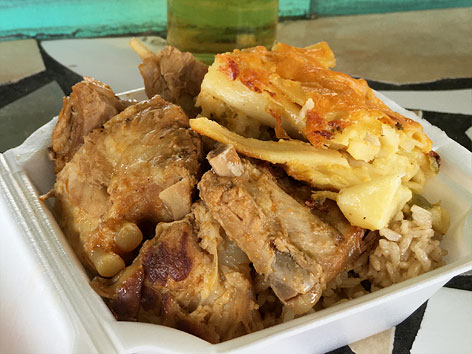 What: Pigeon peas and rice, and any number of steamed or baked meats/fish (plus sides), are at the heart of Bahamian home cooking. This is largely the domain of lunch vans and food trucks, those that cater to workers and people on the go, looking for a midday meal much like the one someone might cook for them at home. As a visitor, you might have to poke around a bit to find these sorts of places, but we promise it’ll be worth the extra trouble—both for your taste buds and your wallet.

Good to know: Bahamian peas and rice is the modern-day iteration of what began life as peas and (cornmeal) grits, back when pigeon pea plants and corn were hardy staples on any given farm. Their harvests generally followed each other after the rainy season, thus giving life to the dish. In the early 20th century, however, rice became the sexier imported grain of choice to pair with the peas (grits are still common in Bahamian cuisine, mostly at breakfast). Peas and rice is typically seasoned with tomatoes and tomato paste, onions, thyme, and often salted pork or bacon. Vegetarians, beware!

Where: A bright green truck that parks at the very end of Potter’s Cay, Evelyn’s Kitchen (422-0137/425-8335; map) offers great down-home, meaty Bahamian and Creole variety to the conch-shack scene on this cay, which extends out under the bridge connecting Nassau to Paradise Island.  To be sure, you should try a conch salad at one of these shacks. Just save room for a breakfast or lunch from Evelyn’s too.

When: Daily, 6am-3pm (breakfast only on Sundays)

Order: Pictured are the steamed ribs, peas and rice, and (local style) macaroni-and-cheese—which is to say it’s baked like a casserole and cut into cheesy squares or wedges—a heap of food that set us back $6 at lunch. We also tried the delicious little nuggets of steamed turkey over peas and rice, with a side of creamy potato salad. Other dishes on offer: steamed mutton, chicken, pork chop, or fish; fried fish; curry chicken; and griot, a Haitian fried pork dish common around here. (And for breakfast, there’s grits to pair with fish, sausage, corn beef, or steamed ham, as well as souse.)

Alternatively: We spotted some roadside vendors behind Montagu beach, east of downtown Nassau, that carried similar fare; there were also a couple of women offering this kind of lunch on the sliver of Cable Beach just west of the Sandals resort. Also be on the lookout for lunch vans; we found one called Shan’s in the lot behind the massive Mélia resort in Cable Beach (approx. map, but in the roundabout). In general these are the types of places you have to ask around for to find, so don’t be shy! If street food isn’t your style, seek out a real Bahamian-food restaurant, like Bahamian Cooking (Trinity St., approx. map) in downtown Nassau, which offers these dishes (though for considerably more money).