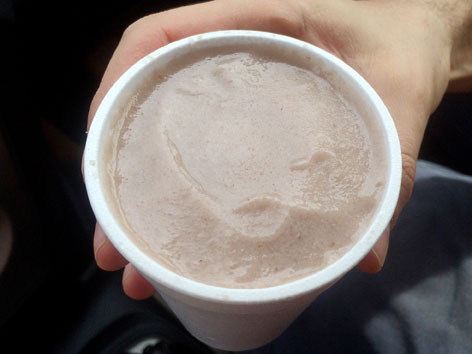 What: Despite the tropical climate, Jamaicans love their hot, soupy breakfast porridge—but before you think, Oh, porridge, how boring, know this: In true Jamaican style, this stuff is super flavorful. Popular varieties include peanut, hominy corn, oats, and cornmeal; common ingredients are coconut and/or condensed milk, cinnamon, nutmeg, allspice, vanilla. The dish’s origins likely lurk within the centuries of British colonial rule—porridge being an inherently British thing—but let’s not discount the porridges of Africa that may have been shared by the African slaves on the island, all of which stand to serve the same purpose: carb-heavy gruel to fill the belly for the day ahead. In either case, somewhere along the way, Jamaicans made it a sweet, creamy, delicious thing all their own.

Where: This peanut porridge is from a street cart called London’s we spotted on St. James Street in Montego Bay (map) one morning. The vendor was not alone in dishing out this stuff; a bunch of other telltale aluminum pots were spotted farther down the street.

When: No set hours, but this is breakfast food.

Order: This cart offered both peanut and hominy corn porridge (JA$130/$250 for small/large); we were informed the former was more popular, and we could see why: A thick, sweet, soupy mix of peanuts, coconut milk, vanilla, and Farina-like wheat cereal, it was belly-warming and rich with flavor.