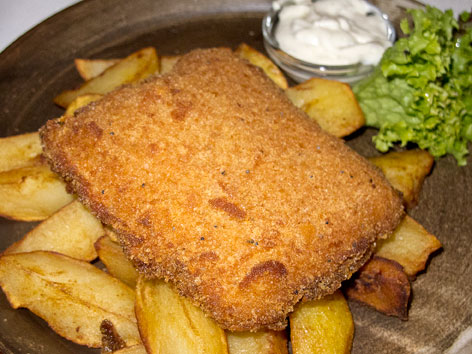 What: Like a mozzarella stick on steroids, smažený sýr (“sma-zhen-ee seer”), or smazak for short, is a block of cheese, usually Edam, coated in flour, egg, and breadcrumbs, and then fried to a crispy golden-brown. It’s typically accompanied on a plate by some salad or cabbage, potatoes, and tartar sauce, or it’s served burger-like, with tartar sauce or mayo, in a bun. (Unlike a mozzarella stick, it’s intended as a main course, not an appetizer.) You can imagine why smazak, one of the country’s most popular meatless dishes (one day trademarked as a Czech food, perhaps), is a beloved pub item and late-night order at the city’s street carts—this definitely falls in the category of “best with or after a few beers.” It’s not a particularly delicate dish, but neither are most of the world’s guilty-pleasure comfort foods.

Where: Sprawling, three-story U Pinkasů (Jungmannovo náměstí 16, Praha 1) is celebrated for its beer first and foremost—allegedly the city’s oldest Pilsner Urqell pub (established 1843), it remains a popular tankovna, pouring unpasteurized Pilsner from the tank, among tourists and locals alike. The multipage, multilingual menu contains a few good Czech-food items, though the prices reflect a touristy clientele.

Order: The smažený sýr (169 CZK) was pretty straightforward here: crispy-fried on the outside, soft and oozy inside; unapologetically served with thick fries, tartar sauce, and a small piece of lettuce. Add some protein to your meal by starting with the excellent tatarák, or minced raw beef.

Alternatively: Nearly any pub or Czech restaurant will serve it, but often touted as having the best smažený sýr—perhaps as refined as it can be—is a restaurant called Doba (Náměstí míru 16, Praha 2, map), where it comes three to a plate. Likewise, one of our users reports that the version at Lokál (two locations including Dlouhá 33, Praha 1, map) is also more delicate, and fried in butter for extra flavor (pic). At the other end of the spectrum are the street vendors: Stumble to one of their various hubs around town—such as Wenceslas Square (map), the city center’s main commercial district—and, among all the hanging sausages, you’ll enter smazak in humble sandwich form.