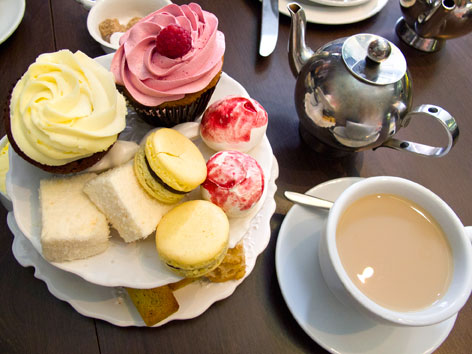 Afternoon tea, like the less common “elevenses,” is one of those lovely British solutions to feeling peckish between meals. It likely dates to around the late 1700s, when it became popular among certain fashionable ladies to serve tea and snacks between the typically light lunch and late dinner. Afternoon tea generally calls for tea, of course, alongside such dainty treats as scones, biscuits, cakes, and elegant finger sandwiches (“cream tea,” which originated in Devon but is known all over the U.K., only requires scones, jam, and clotted cream).

As opposed to high tea, which is more of an early dinner with meat (and is traditionally more associated with the working class), afternoon tea is a leisurely social activity—a perfect excuse to slow down, sip tea, and snack among company. London has a plethora of places at which to indulge in afternoon tea. Depending on your budget, you might pull out all the stops and channel your inner 18th-century socialite, or simply sit down and catch up with friends. Either way, it's a cultural experience you shouldn't pass up when in London.

Good to know: Generally speaking, most tea spots require or strongly suggest reserving ahead of time and will not permit you to share one afternoon tea order among two people.

Where: We took our tea at Bea’s of Bloomsbury (multiple locations including 27A Devonshire St., map), a beautiful little tea room perfect for trying all the cupcakes, meringues, marshmallows, cookies, and cakes you want with your tea.

Order: Pictured are two servings of the afternoon sweet tea, which got us a two-tiered cake stand with one of Bea’s signature cupcakes, a warm scone with clotted cream and jam, mini meringues, fat homemade marshmallows, and other mini desserts, with a pot of Canton tea. This option no longer exists at Bea's: You either go the fully monty and order the full afternoon tea (which includes the sweet stuff plus savory sandwiches, £30; vegetarian and gluten-free options available), or, if you have less of a sweet tooth and a smaller budget, go for the cream tea (£9.95), which is just tea and two scones with homemade jam—our two favorite parts of the whole experience. (A champagne tea is also offered here, for £45.)

Alternatively: For £21, the excellent Dean Street Townhouse (69-71 Dean St., map) in Soho serves its afternoon tea from 2pm-6pm—finger sandwiches, scones and cream, and fancy British cakes—as well as an £8 cream tea on offer. Further up the scale is the celebrated afternoon tea at The Wolseley (160 Piccadilly, map), going for £29.75 a head and including all the traditional elements (a less expensive cream tea is also available, as well as a more expensive champagne tea).The award-winning afternoon tea service at The Athenaeum Hotel (116 Piccadilly, map) in Mayfair starts at £39. If you want to break the bank some more, book well in advance for Claridge’s (49 Brook St., map), a luxury hotel likewise in Mayfair, where the famously lavish, music-backed afternoon tea goes for £70 per person.