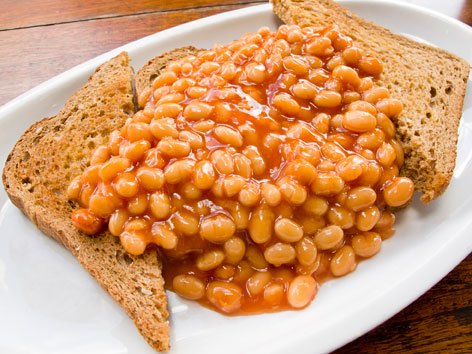 Why do Brits like dumping a can of beans on their toast? First it's important to note that unlike, say, Boston’s baked beans, British beans on toast are supposed to come from a can—preferably a blue Heinz can of “baked beans in tomato sauce” (which remain quite different from America’s sweeter, porkier canned baked beans), although other brands are out there. Never mind that these navy beans are actually stewed: The point is that it’s inexpensive, filling, nostalgic, and oh-so-British, literally just canned beans heated up and served over (hopefully) buttered toast.

So what are the origins of beans on toast? Heinz claims that an executive invented the dish as a marketing ploy in 1927, but it’s likely the dish is still around today because it was so common as a cheap protein during World War II, for breakfast, dinner, or both. Today it’s more popular as breakkie for broke university students, budget-strapped travelers, and, well, people feeling nostalgic for those days. Some people add mustard or HP sauce; some melt cheese on top; many won’t eat a traditional English fry-up without it on the side.

As for the taste: It’s just exactly what it sounds like—there’s no secret hidden ingredient, though butter definitely makes it better. So if you like British canned beans, you’ll be in good shape.

Where: In truth, there are not a ton of places that put beans on toast on their menu. Our picture is from pretty South Kensington, where we breakfasted on this at the now-defunct Greenfields Sandwich Emporium & Café, a cozy little take-away and café with sidewalk seating. (Please see alternative spots to find this below.)

Order: Our beans on toast (£3.50) got the job done: a few triangles of lightly buttered brown toast, a huge pile of tomato-y beans. We added a little hot sauce and HP sauce to taste, and couldn’t help thinking a fried egg on top would really take it up a notch. Also on the breakfast menu here was the always-lovable bacon sandwich and some other items “on toast,” including that other British favorite, Marmite.

Alternatively: Look for this dish in similarly casual cafes and delis. We loved Shoreditch’s Albion Cafe (2-4 Boundary St., map), a hip little spot that offers beans on toast with cheese and butter at breakfast. In Hackney, you might try Coffee Is My Cup of Tea (103B Dalston Ln, Dalston, map), where the beans are homemade and organic (and served at breakfast). Not a ton of places are bold enough to list this on a menu—it is traditionally a made-at-home kind of dish—but you have to admire the spots that do!

It's easier to find baked beans as a side dish (as at the Rivington Greenwich, which focuses on seasonal, locally sourced British cuisine; 178 Greenwich High Rd., map) or as part of a full English breakfast, as at Dean Street Townhouse (69-71 Dean St., map) or the Table Cafe (83 Southwark St., map). You can also find some posher riffs on this classic dish if you know where to look.

Or, if you have your own apartment, head on over to Waitrose and pick up the very simple ingredients—beans, bread, butter—to have a go at it yourself. There are a lot of more involved “recipes” out there, but you don't need to be fancy here to get the real-deal experience.