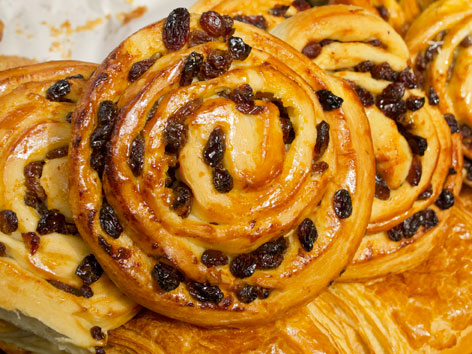 Created at a bakery in the Chelsea area of West London in the 18th century, Chelsea buns are truly local to the British capital. They are made from a spiced yeast dough that’s rolled out and topped with currants, sugar, cinnamon, and butter. The dough is coiled into a spiral roll, sliced up, baked, and covered with a sweet sugar glaze. The sticky square-shaped result—a source of instant nostalgia for many a Brit—is similar to what some of us know as a cinnamon roll, with the addition of currants: sweet, buttery, and dense. In a word, delicious.

Where: Our favorite source for historic artisanal breads is The Flour Station, a wholesaler found in the Jubilee Market area of Borough Market (8 Southwark St., map), among other markets and shops.

When: The Flour Station is at Borough Market on Fri and Sat, and variouis other markets throughout the week. Check the website for details.

Order: A sweet, thick Chelsea bun (£2.50) is a must, chock-full of currants and dusted with sugar. Buy one to eat with tea later, but good luck not tearing into it right away. Another good pastry here is the Eccles cake, as well as British breads like English muffins, cobs, and bloomers.

Alternatively: You should be able to find the Flour Station at one of London's great markets throughout the week. If not, in North London, try Dunn’s Bakery (6 The Broadway, Crouch End, map) on weekends for Chelsea buns.