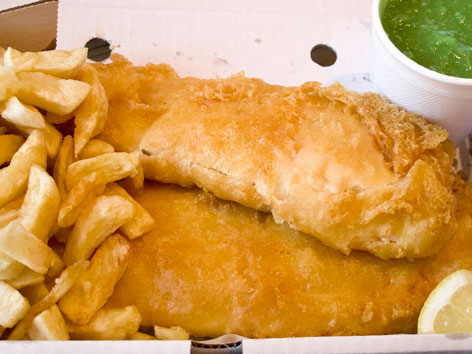 Perhaps the most quintessential British takeaway meal, fish and chips is, of course, golden, battered, deep-fried fish—generally a mild white fish such as cod, haddock, pollack, or plaice—paired with salted, thick-cut chips, a.k.a. fries, often served with malt vinegar and lemon. But just how "British" is this dish?

As a combination, the dish is thought to have come about in the 1860s, in either London or Lancashire—although, as The Oxford Companion to Food notes, it’s highly likely that, having each enjoyed separate lives for decades prior, the two components shared a plate at some point earlier than that. Chips, borrowed from France or Belgium, at some point replaced baked potatoes as a common street food in England. But it was Marrano Jewish refugees from Portugal and Spain who popularized fried fish in London’s East End earlier—indeed, one story attributes the first fish and chip shop, or “chippy,” in London to a Jewish immigrant named Malin.

However the happy partnership started, there’s no denying it was a genius idea—with so much hot crispiness on one plate (or, as it were, wrapped in one newspaper), working-class diets were quickly enthralled. It’s even said that fish and chips helped sustain morale (and keep stomachs full) during World War II, when it was one of the few foods the government sought not to ration. It was a poor-man’s food fit for a king.

At some point, beginning in the north of England, mushy peas—dried marrowfat peas that have been soaked and simmered into a mushy bright-green puree (food coloring is often added to achieve the hue)—became the vegetable side of choice with fish and chips. There’s no denying the peas brighten up the plate a bit. Nowadays, you’d be remiss to miss this trio while in London.

Where: Of course there are some great chippies in London, but we took the opportunity to try our fish and chips outside of the city, at The Ridgeway Fish Bar & Kebabs (7-8 The Quadrant, Marshall Wick, map) in St. Albans, a picturesque city and historic market town complete with Roman ruins about 20 miles north of London.

Order: You have your choice of cod, haddock, plaice, rock salmon (a.k.a. huss), or scampi (prawn tails) here, ranging £3.20-£6.70; we recommend the haddock (£4.60) with chips (£1.40 for standard) and mushy peas (£.85). Other popular extras are curry sauce, pickled onions, and, of course, vinegar—but as this is a takeaway, we added that at home. This was a good fish and chips, especially with lemon and malt vinegar: fresh-tasting, chunky fish; a great golden, not excessively heavy batter; thick, if stubby, chips. The mushy peas were salty but tasty, and though unnaturally green, they were a good addition to the otherwise overwhelming beige plate…plus they made a yummy dipping sauce for the fish.

Alternatively: The West End’s Golden Hind (020-7486-3644; 73 Marylebone Lane, map) has been battering and frying fish since 1914, to rave reviews; and we would’ve liked to visit Toff’s of Muswell Hill (38 Muswell Hill Broadway, map), an award-winning, always-bustling chippy in North London with big portions and (we’ve heard) perfectly fried fish; reserve if you’re dining in. In Spitalfields, Poppies (6-8 Hanbury St., map) strives for tradition—its fish and chips come wrapped in fake newspaper—and is doing a pretty good job, given that it’s been open since 1945, while The Fish Club (multiple locations including 189 St John's Hill, map) aims for sustainably sourced fish and some unusual offerings, like rainbow trout and sweet potato fries. Among pubs, it’s probably smart to avoid dining in the multitudes that advertise their delicious “traditional fish and chips” with photos identical to every other pub’s. Instead, check out a gastropub like The Greenwich Union (56 Royal Hill, map) in Greenwich, where a higher premium is placed on homemade quality.