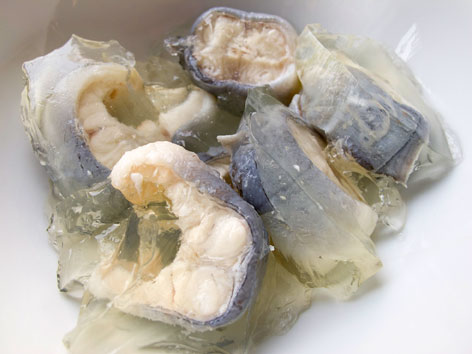 Promise to give jellied eels a chance, OK? The name alone stacks the odds against it in this day and age, but this London-born dish, along with partners-in-crime pie and mash, is among the most historic to survive in the city today—and it actually tastes good.

What are jellied eels?

In the 18th century, native eels were plentiful in the River Thames and estuary, and Dutch eel barges and fishmongers a common sight. One cheap and easy preparation, particularly among the East End working-class poor, was to chop the eels, boil them in herbs, and then allow them to cool. The eels would produce enough of their own gelatin so that a soft jelly would form around the pieces. (Today, a bit of gelatin is often added.) When the first pie-and-mash shops began opening in the 19th century, jellied eels—and stewed eels, boiled and served hot—were the only other staple on the menu. And so it is today at the handful of legit eel-pie-and-mash shops remaining.

As for the taste? Once you get past the soft texture, which can be off-putting, the taste is great—mild and slightly salty, not at all “fishy.” There's just one bone in the eel to eat around. Common accompaniments are vinegar and white pepper.

Where to try jellied eels

The best place to try jellied eels in London is in a real-deal pie-and-mash shop. Ours came from Clark’s (46 Exmouth Market), in the midst of hip Exmouth Market. Until it closed (see below), it was a refreshing blast from the past, established in 1910: small and white-tiled inside, with wooden pew-like booths and tables.

Ed's note: Sadly, Clark's closed in 2013, one of many pie-and-mash shops that have shuttered in recent years. These are a dying breed, folks. Visit one while you can!

Order: Jellied eels (£2.55). Although the traditional cockney way is to put a whole piece in your mouth and eat around the central hook-shape bone, we weren’t so bold—those suckers look easy to choke on—and preferred to bite around it. We’ll also admit that we avoided eating much of the gelatin, which tasted like kind of a cold, fishy, vinegary Jell-O. The vinegar’s a good addition, but stick to the fish!

Alternatively: The surviving traditional East End pie-and-mash shops will likewise serve jellied eels. Try M. Manze (multiple locations including the original at 87 Tower Bridge Rd., map)—the oldest pie shop in London, dating to 1902—or F. Cooke (9 Broadway Market, map), in Hackney’s Broadway Market; both the Manzes and the Cookes are surviving families of the good ol’ eel-pie-and-mash days of yore. For more old-school options check out this list from Time Out.