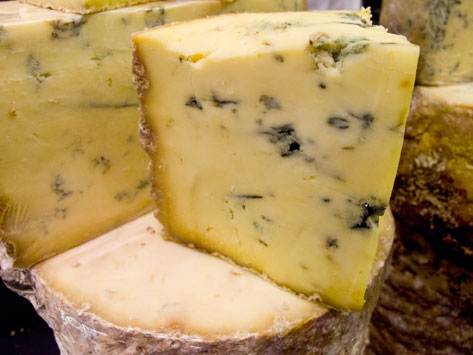 What: England has a long, rich history of cheese-making that continues today: More than 700 types of cheese are produced in the country, according to the British Cheese Board. While London itself is not particularly known as cheese-making central, as the capital it is where all the English cheeses (and then some) are sold. Besides, one look at a London market—or any gastropub menu—confirms that this is an artisanal cheese-lovers’ city. The big players we’ll focus on are cheddar—which originated in the Somerset, England, town of Cheddar in the 12th century—and two types of beloved British blue cheese: Stilton, dating to the early 18th century, and Stichelton, similar to Stilton but made with unpasteurized milk.

Where: Renowned cheesemonger and exporter Neal’s Yard Dairy (multiple locations including 6 Park St., Borough Market, map) is a British artisanal cheese-eater’s dream. Via three shops and a handful of market stalls, the company provides London with cheese from 70-plus English and Irish cheese-makers.

When: The shop near Borough Market is open Mon-Sat, 9am-6pm

Order: You could spend hours smelling and tasting and inquiring about the beautiful cheeses on offer at this shop—and you absolutely should. But for purposes of brevity, let us say these are the musts (expect to pay about £20-£30 per kilogram):

Montgomery’s cheddar: Rich, nutty, and moderately crumbly, it’s the king of British cheddars, handmade as per tradition in Somerset using unpasteurized milk and animal rennet and aged for a minimum of one year. It’s the same cheddar used in Kappacasein’s celebrated cheese toastie.

Stilton blue cheese: Creamy, savory, and full-bodied, Stilton enjoys Protected Designation of Origin (PDO) status; it can therefore only be made by six licensed dairies in the three counties of Derbyshire, Leicestershire, and Nottinghamshire. Neal’s Yard gets its Stilton from the tiny Colston Bassett dairy, which makes a more traditional Stilton using animal rennet (most others use vegetable rennet). Interestingly, all Stilton cheese has been required by law to use pasteurized milk only as of 1989, thanks to a widespread food-poisoning scare (later deemed unconnected to the cheese). Hence, Stilton’s unpasteurized younger sister has to call itself a different name: Stichelton.

Stichelton blue cheese: More or less the same as Stilton, except made with raw organic milk and animal rennet and therefore likely closer in taste/appearance to the original Stilton of centuries past. Handmade in small batches on a Nottinghamshire farm since 2006, Stichelton is a deliciously buttery, tangy blue cheese. It’s one of very few unpasteurized blues produced in England today—a great British delicacy that’s thankfully avoided extinction.

Alternatively: Every cheese fan owes it to themselves to visit a Neal’s Yard Dairy. However, you’ll encounter other great cheese-makers and -mongers at other shops and markets around the city. You might check out La Fromagerie (two locations including 2-6 Moxon St., Marylebone, map), a fine cheese shop with lots of offerings from England (and well beyond). Open Thursday-Saturday, Borough Market (8 Southwark St., map) has a nice variety of artisanal cheeses, notably at the Gorwydd Caerphilly (Trethowan’s Dairy) stand—peddling traditional unpasteurized, earthy caerphilly cheese from Wales (Neal’s Yard carries it as well)—and Alsop & Walker, which counts the creamy, soft Lord London among the cheeses it makes in its East Sussex factory. (BM also features a handful of excellent French and Italian cheese makers.) In addition, many good gastropubs and British-food restaurants, like the classic Rules (35 Maiden Ln., map) in Covent Garden, offer nice cheese plates featuring English cheeses (Rules has a Cropwell Bishop Stilton as well as a “British regional cheese” plate, both for £11.95).