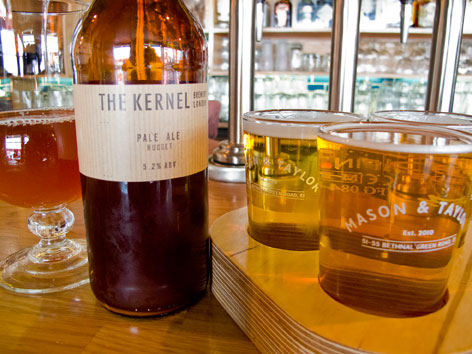 What: “Craft beer” is a U.S. term, but it’s catching on like wildfire in London and the rest of England, where more and more beer drinkers have made it clear they want more than just mass-market brands and the usual-suspect real ales at their local pub. Though there are no exact guidelines for what constitutes a craft beer here, they are generally defined by being handmade in small batches by small (micro)breweries, with more experimental tendencies in flavor and strength. In London proper, a handful of terrific craft brewers have appeared on the scene in the last decade, including Meantime Brewing Co—now pretty much a fixture on any good restaurant’s beer list—The Kernel, Brodie’s, Camden Town, and London Fields.

A note about craft beer vs. real ale: It’s a bit of a messy distinction, actually, because all craft beers are, by definition, small-production and handcrafted, and some are even brewed just like real ales: unfiltered (or lightly filtered), unpasteurized, re-fermented in a cask or bottle before consumption. The difference is that those craft beers not coming out of a cask are happily carbonated and served cold (though not ice-cold); moreover, craft beers in general tend to be much more experimental in flavor and style—after all, they’re not tied to any particular tradition. But while some craft-beer connoisseurs claim that real ale is no longer relevant in the U.K.—the term was coined in the ’70s to separate traditional, natural beer from big-brewer processed beer, the very same opponent that craft beer is up against today—we think the relevance lies in the word traditional. Real ale from a cask may not be any more “real” than a keg-pumped handcrafted microbrew, but it is essential to the U.K.’s gastronomic heritage. There’s something wonderful to be said for going to a pub and having all the options: old-school real ale, experimental craft brew, and, uh, mass-produced crud.

Where: While some breweries are open for visitors (see below), a good beer bar—several of which have recently opened in London—is a great way to try several microbrews in one go. Our photo is from Mason & Taylor (51-55 Bethnal Green Rd.), which unfortunately closed in September 2012. There are plans for a new location, but in its absence are many other terrific bars focusing on London-area craft beers (and beyond). We’re fans of Euston Tap (190 Euston Rd., map) at Euston train station, a tiny beer bar with big ambitions (and a heated garden) awesomely situated in a stone lodge-relic of the original 1830s-built station.

Visit a brewery: Every Saturday you can visit The Kernel (Arch 11 Dockley Rd., map) between 9am and 3pm; it makes a lovely stop at the weekly Maltby Street market, when the area’s other artisanal vendors open for business (see also: cheese toastie). Brodie’s (816 High Rd., map) has a 16-beer tap room (King William the Fourth) next-door to its brewery in Leyton; email or call to schedule a free tour of the brewery. Meantime (Blackwall Ln, map) offers a variety of tours for a fee (including £20 tours Thu-Fri at 7pm, Sun at 2pm, and six tours on Sat—you must pre-book), and Camden Town (55-59 Wilkin St. Mews, map) has an on-site brewery bar (open Thurs-Sat, noon-11pm), plus £12 tours every Thursday at 6pm and some Saturdays. In Hackney is the trendy London Fields microbrewery (369-370 Helmsley Pl., map), offering £10 small-group tours and tastings every Saturday at 1pm and 3pm. (Note: In 2017, this brewery was bought out by Carlsberg amid tax fraud allegations; check its Facebook page for current info on tastings.)

Other good beer bars: Opened in spring 2011, the Craft Beer Co. (82 Leather Ln, map) in Clerkenwell has quickly gained a reputation among London beer drinkers, with 16 casks, 300-plus bottles, and what it clams is the U.K.’s largest keg selection; while the bar does a lot of importing, London and U.K. independent microbrewers are always well represented. Its sister bar, Cask Pub & Kitchen (6 Charlwood St., map) in Pimlico is likewise a good bet, as is U.K.-microbrewery-focused The Southampton Arms (139 Highgate Rd., map) in Kentish Town (near Hampstead Heath). Draft House (multiple locations including 206-208 Tower Bridge Rd., map) near Tower Bridge is another solid beer bar that lets you taste in third-pints.