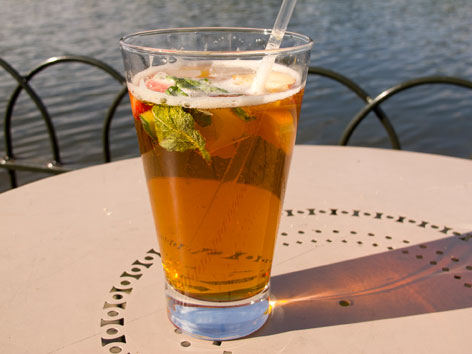 What: Born in a London oyster bar sometime between 1823 and 1840, when it was thought to aid digestion, the original Pimm’s is a gin-based liqueur made with quinine and fruit/herb extracts. Its creator, James Pimm, took to serving it in a small tankard as the “house cup”—hence the later name, Pimm’s No. 1 Cup. Over the years five more fruit “cups,” each with a different alcohol base, were created by the company, but it’s the gin-based No. 1, along with lemonade (which is clear and carbonated, more akin to lemon-lime soda, in this country) and fruity garnishes—traditionally orange, lemon, cucumber, and mint, though strawberry and apple sometimes make appearances—that is traditionally used in the famous Pimm’s Cup cocktail. Served in a highball glass with some ice, the handsome low-proof drink, sweet and refreshing, has become associated with polite summer English society thanks to its ties to the annual tennis tournament at Wimbledon, where it’s been widely enjoyed since 1971. Nowadays it’s practically synonymous with summer in England itself: With warm weather comes a slew of advertisements for Pimm’s Cups and pitchers in many a London bar; it’s always “Pimm’s o’clock”! How to drink it? In a sunny garden or while on the water, amid the witty and well-dressed, while reflecting on the good life.*

*Or, just as well, inside a pub, for brief but instant respite from a wet and dreary gray day.

Where: Our cup o’ Pimm’s came from Lido Café (020-7706-7098, map), on the south side of the oblong Serpentine lake in the middle of gorgeous Hyde Park. On a nice day, a location more ideal than its patio is hard to fathom.

Order: A Pimm’s Cup (£5.75) or pitcher (£19.75)—you do pay a bit extra for this lovely location overlooking the quiet, duck-sprinkled lake. The Pimm’s No. 1 was mixed with Schweppes-brand lemonade, apple, orange, cucumber, and mint, with just a little ice, and served in a generous pint glass.

Alternatively: Pimm’s Cups aren’t hard to find in London during the spring and summer months. Another atmospheric area in which to imbibe is along the South Bank, where outdoor bars aplenty advertise Pimm’s pitchers, and often for a more reasonable £14. Come winter, look for “Winter Pimm’s,” a concoction made with the brandy-based Pimm’s No. 3 and apple juice, served hot.

Good to know: At some point in the 20th century, New Orleans adopted the Pimm’s Cup as one of its own favorite cocktails.