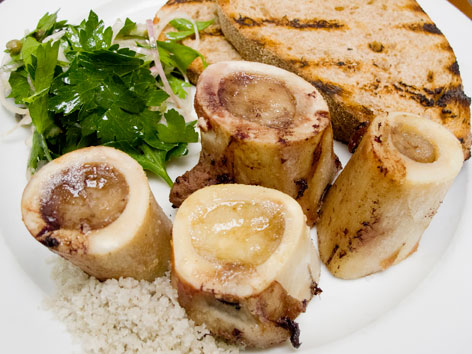 What: Bone marrow, typically used to flavor and thicken stews and stocks, in general has made a big comeback as a standalone dish in the culinary worlds at both ends of the Atlantic, and we have London’s Fergus Henderson to thank. Since opening his landmark St. John restaurant in 1994, chef Henderson has served roasted veal marrowbones—still in the bones, with parsley salad, gray sea salt, and toast—on its menu, just one of the dishes that’s come to embody his back-to-British-basics nose-to-tail cooking. Today, we’d argue that roast bone marrow is a signature dish of not only the restaurant, but also the city of London itself.

Where: In the East End neighborhood of Clerkenwell, St. John (26 St. John St., map) is a no-frills, white-walled affair housed in a former smokehouse, around the corner from the 800-year-old Smithfield meat market.

Order: The roast bone marrow and parsley salad (£11) is St. John’s signature dish, always present on the otherwise-changing seasonal menu, and the same one the late, great Anthony Bourdain has famously claimed as his “death-row meal.” Four roasted veal bones, bold in their simplicity, are joined by a bright, lemony parsley salad, with sliced shallots and capers; a pile of gray sea salt, crunchy and damp; and two slices of toasted, crusty sourdough bread. The idea is to spread the hot, meltingly rich marrow onto the bread—baked at sister bakery St. John Bakery—top it with a pinch of salt and parsley salad, and enjoy. It’s a primal, indulgent, memorable dish.

Alternatively: This particular dish has inspired many copycats—again, on both sides of the Atlantic—but we say there’s none like the original.