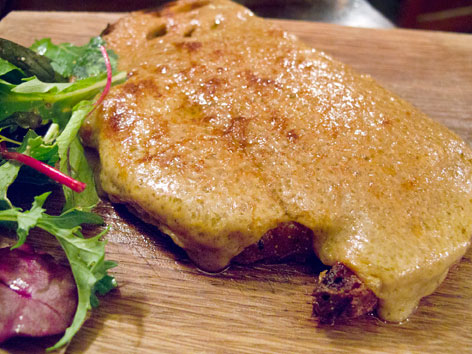 What: It’s also known as Welsh rabbit, but it’s purely vegetarian. Huh? That’s right: Welsh rarebit is toast topped with a savory melted-cheese spread, made with things like English cheddar, beer, Worcestershire sauce, maybe some cayenne, mustard, and paprika. There’s some confusion over the origins of its name, but as one story tells it, it began as a dig on the people of Wales, who centuries ago were famously poor; back then, rabbit was the poor man’s meat of England, while in Wales it was—cheese. With apologies to the Welsh, we think it’s a delicious bar snack practically begging to be drunk alongside a mug of beer.

Where: In East London’s Clerkenwell, the restored Victorian-era Fox & Anchor (115 Charterhouse St., map) gastropub is a beautiful place to eat and drink, with traditional dark paneling and a handful of little nook-and-cranny rooms.

Good to know: Fox & Anchor doubles as an inn, with six thoughtfully designed rooms upstairs from the pub. (See: Where to Stay)

Order: As Fox & Anchor is a gastropub, the menu is always changing with the seasons. But you’ll often see Welsh rarebit available (£5.75). And when it’s here, it’s good stuff: a piece of toast covered in a thick layer of English cheddar that’s been cooked with stout and Worcestershire sauce. It’s very cheesy and rich, well balanced by mixed greens on the side—and well paired with one of the pub’s real ales. Also try the local rock oysters here.

Alternatively: Look for Welsh rarebit on other gastropub menus around town. The excellent Albion Café (2-4 Boundary St., map), in Shoreditch, usually has “Welsh rabbit” among its typical Brit offerings, as do the Canteen (multiple locations include Royal Festival Hall, Belvedere Rd., map) restaurants, where it’s served with a poached egg.