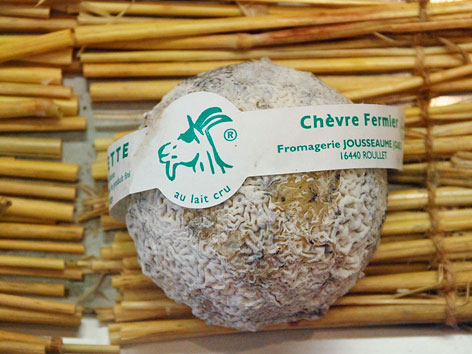 What: In all regions of France, cheese is coveted and revered. In restaurants, as in family homes, cheese is served before (or instead of) dessert. There is dizzying variety, as the cheese might be crafted from cow, goat, and sheep milk by thousands of cheesemakers around the country. In Charente-Maritime, the proximity to neighboring Deux-Sèvres is important, as Deux-Sèvres produces the majority of France’s goat cheese. Many local cheeses are made by manufacturers who straddle the geographical border between Charente-Maritime and Deux-Sèvres. While we encourage the tasting of as much local cheese as possible, we’re going to focus here on two of the most common in this region, taupinette and Le Mottin Charentais.

Taupinette is an award-winning cheese made from raw goat’s milk. The soft white rind is dusted with charcoal, lending the variegated rind a blue-gray color, and a faint ashy taste. The inside is fresh, creamy, and every so slightly salty. This cheese pairs well with pineau des Charentes. Le Mottin Charentais, meanwhile, is the most commercially available cheese made in Charente-Maritime; it’s readily available at the La Rochelle Market as well as in supermarkets. This double-cream cheese is made from pasteurized cow’s milk, and is semisoft and super buttery.

Where: Both taupinette and Le Mottin Charentais are available at the Place du Marché (Rue de la Marché), La Rochelle’s covered market, which dates to the 19th century and is popular among locals and tourists alike.

When: The market is open daily from 7am-1pm. On Wed and Sat, the market expands into the plaza outside.

Order: You’ll have your pick of the litter here. Pictured is the taupinette (€3,72), which you can happily pair with some fresh bread and local wine from the market. While you’re here, ask to try other cheeses made in the neighboring departments of Deux-Sèvres and Vendée, such as Le Parthenay (a raw goat’s milk cheese), chabis (another raw goat’s milk cheese), and mizotte (a cow’s milk cheese with a white-wine-washed rind and a bit of a bite). Throw in a few pieces of fruit, and you have a mighty fine picnic.

Alternatively: Most restaurants offer a cheese plate as a dessert option, including the oceanfront A La Plancha (05-46-68-10-34, 12 Ter Cours Félix Fauré, map) on Île de Ré. At Les Flots (1 Rue de la Chaîne, map) in La Rochelle, you can likewise conclude your meal with a plate of specially selected cheeses.