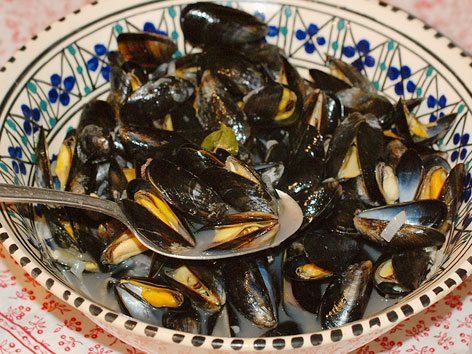 What: The people of Charente-Maritime have been raising mussels since the Middle Ages, so naturally mussel dishes figure prominently in local gastronomy. The old practices of harvesting mussels are still observed today—independent farmers catch mussel larvae on the open sea, and the larvae are attached to long ropes, which are wrapped spirally around protracted wooden poles embedded in the silty sand near the shore. The changing tides, the Charente-Maritime sunshine, and the watchful care of each farmer are all factors in what make these mussels so tasty. Mussels from Charente-Maritime are generally small and have bright orange flesh, and lend themselves well to many preparations (see below).

Where: Our photo of a typical mussels dish, the simple and delicious moules marnières—in which the shellfish are cooked with white wine, shallots, butter, thyme, parsley, and bay leaf—is from a local’s home. But you can find a near-identical plate of these and other mussel dishes at many local restaurants, including La Rochelle’s La Marée (1 Avenue de Colmar). You can sit outdoors in nice weather, on a plaza facing the aquarium.

Order: At La Marée, expect to pay €14 to €16 for a good plate of mussels, including moules marnières. This is also a good spot to try a range of other local seafood, such as huîtres (oysters), langoustines, bigorneau (whelks), and chaudrée, a popular thick fish chowder unique to the region.

Alternatively: In St. Denis, Île d’Oléron, we like Quai 17 (05-46-85-62-98; 10 Rue Pierre Metayer, map), as it serves 15 different mussels dishes in addition to other island shellfish—and there’s a heated terrace that faces the Port de Plaisance. But since mussels are such an important local product, many restaurants in the Charente-Maritime region will include at least one mussel dish on their menu. Mouclade, in which the shellfish are cooked with shallots, white wine, egg whites, local butter, curry, and crème fraiche,is one especially well-known dish, but other common preparations to look out for include moules au Roquefort (mussels with Roquefort cheese), moules au Camembert (mussels with Camembert cheese), moules à la crème (mussels with cream), moules aux lardons (mussels with bacon), moules au pineau des Charentes (mussels with pineau). Many variations rely on basic ingredients like garlic, onions, bacon, tomatoes, cognac, and fresh herbs, while others play with more unusual ingredients like saffron, orange zest, and pine.