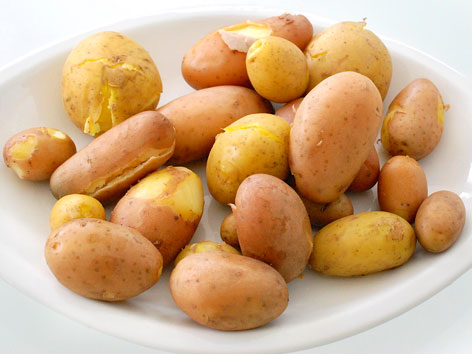 What: Pomme de Terre de Île de Ré are potatoes (pomme) grown on Île de Ré, which probably sounds simpler than it is. To the French, the concept of “terroir” is very important; they believe that geography, climate, and soil structure imbue food and drink with particular traits. Producers who prove strict adherence to a set of government guidelines are awarded the Appellation d’Origine Contrôlée (AOC) designation, which basically means that the food item in question is high in quality and made with care in its unique place of origin. The pomme de terre de Île de Ré not only enjoys AOC status, but it’s also the only potato to hold an Appellation d’Origine Protégée, or AOP (which provides protection of existence under the law).

So what exactly makes a potato an Île de Ré potato? For one thing, it can be grown only on certain parts of the island, and even then, only some varieties of potato are allowed. Then follows a string of particulars, like tuber length (not more than 70 millimeters), production (no more than 25 tons per hectare), and even marketing (none is allowed after July 31st). Île de Ré potatoes are highly seasonal, appearing exclusively in May and June. The taste varies depending on when they are picked—when picked young, before the starch develops, the potatoes are almost sweet. Potatoes grown in the middle of the island might taste of minerals, whereas those grown in sandy soil near the ocean will be saltier. No matter when you eat them, they will be rich with flavor and hardly require the salted butter they’re usually served with.

Where: Since pomme de terre de Île de Ré are available for just two months of the year, keep your eye out for restaurants on the island that feature these potatoes when they can. Among these, Les pieds dans l’eau (Avenue du Front de Mer, La Flotte en Ré) is a great option, with a menu that gives locally sourced foods a new spin.

When: Open for lunch (12pm-2:30pm) and dinner (from 7pm-closing), from April through November. Remember, the potatoes are served only in May and June.

Order: The chef here changes the menu based upon what small local vendors have available, and it’s a safe bet that if you come here during the season, you’ll find Île de Ré potatoes on offer. During our visit, most of the main dishes incorporated the spuds into their preparation; we enjoyed them in a dish of moules des cordes (€15), in which the mussels—cooked with tomato fish stock, ginger, orange juice and zest, and cilantro—were topped with a few potatoes. This is also a great spot to try beer and wine made on Île de Ré.

Our picture, however, is of home-cooked pomme de terre de Île de Ré, as we wanted to show more of the potatoes how they’re most commonly prepared: steamed and served with salted butter.

Alternatively: If you have access to a kitchen, you might pick some Île de Ré potatoes up when in season at the La Brée les Bains market (Rue des Ardillières, map) on Île de Ré, which is open every morning from June 15th through September 15th…although you’ll have to come in June to score these specialty potatoes. They typically go for about €2,50 per kilo at the market. Take ’em back to your kitchen, steam them, and serve with salted butter.