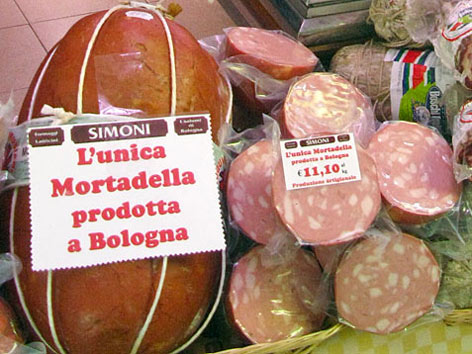 What: Minced pork meat is mixed with high-quality pig fat and seasoned with a blend of spices, then stuffed into casing and cooked to create mortadella, perhaps the most celebrated of the centuries-old pork sausages originating in or around Bologna. The finished product is large and pink, cylindrical or oval-shaped, dotted with pearly-white chunks of fat, and held to strict quality control: Like many of Italy’s prized foodstuffs, mortadella has its own consortium to ensure that tradition is adhered to and quality consistent (for example, the lardons must be fat from the pig’s throat; there must be a particular ratio of meat to fat). It is the meat on which Americans base their “bologna,” but don’t confuse the two: Bologna’s mortadella is smooth, soft, and slightly spicy, with a delicate sweetness. Thinly sliced or cut into cubes like ham, it is a common sight on antipasto plates.

Where: Bologna has dozens of wonderful food shops and lavish salumerias, where mortadella will always be prominently on display (among the fresh pastas, cheeses, salads, vinegars, cured and raw meats, etc.). Our picture is from Salumeria Simoni (Via Drapperie 5/2a), in a bustling area crowded with fishmongers, cheese peddlers, and bartering locals. Sold this way, mortadella can cost anywhere between €15 and €24 per kilogram. Salumeria Simoni

Alternatively: Another popular salumeria that will make you wish for a local kitchen is the nearby Tamburini (Via Caprarie 1, map). Among the many restaurants in Bologna with mortadella on the menu is the old-school Ristorante Da Bertino & Figli (Via delle Lame 55, map), where it’s served sliced on an antipasti platter with prosciutto and salame. We also enjoyed cubes of mortadella alongside little pizzas, salami, and mini sandwiches for the cost of a cocktail at the chic Rivoli Café (051-268529; Via dell’Orso 1/a, map) during aperitivo—essentially Italy’s equivalent to happy hour, but with free food (you’ll find mortadella included in aperitivo spreads all over Emilia-Romagna).