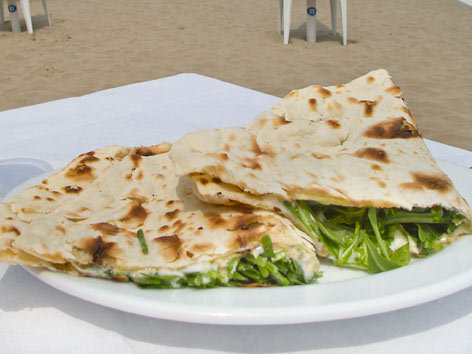 What: Piadina (a.k.a. piada), a flaky, chewy flatbread made from flour, salt, water, and olive oil, is found all over Emilia-Romagna, but particularly in the southeastern Romagna part of the region, where you’ll often see them made one by one on hot griddles at take-out piadineria stands. Lighter and thinner than its inland cousin crescia, piadina is commonly served wrapped around a wide variety of fillings, such as vegetables, leafy greens, meats, and even Nutella; sometimes the bread is served plain, piled into baskets, at the start of a meal. A traditional variation is piadina stuffed with stracchino cheese (a sharper, softer version of cream cheese), arugula (rucola), and prosciutto.

Where: Our piadina is from beachfront Bar Leneredi (0541-600956; Lungomare della Repubblica 65) in Riccione, a popular summer destination along Romagna’s Adriatic coast. Instead of the usual hot griddle or shallow frying pan, this place uses a conveyor belt-like contraption—reminding us a bit of Lucy in the chocolate factory—that carries the formed piadina dough through an oven, baking it to perfection.

When: Open seasonally, Easter through October: Mon-Sat, 9am-midnight; Sun, 8am to 8pm

Order: Pictured is the excellent stracchino and arugula piadina, but you can choose from various salamis, prosciuttos, and cheeses here, with tomato or salad (about €6). This restaurant also serves good pastas and salads. Beach view included!

Alternatively: Find a long line at a takeaway stand—where the piadine are generally a bit cheaper, in the €3- €4 range—and you can trust that it’ll be good. Also in Riccione, there’s Da Romano (no phone; Via Gramsci 69, map), a small stand with a few tables on the sidewalk and huge piadine, offered with a nice range of fillings (you’ll try to save half for later, but good luck with that—they’re too good not to eat in full). Another popular spot, further south down the beach in Misano Adriatico, is Il Capriccio di Gola (Via Litoranea Nord, map), a takeaway stand with outdoor tables across the street from Bagni (beach establishment) 10. The line is worth the wait for the 40-plus fillings available. Nutella and mascarpone, anyone?

Good to know: Many places advertise piadina, but be sure someone is making it fresh in the kitchen. Also, locals tend to adhere to strict mealtimes—lunch around 1pm-1:30 pm; dinner around 9pm. Arrive earlier or later than these peak times to avoid the wait, or else join the line and enjoy the resulting street theater.