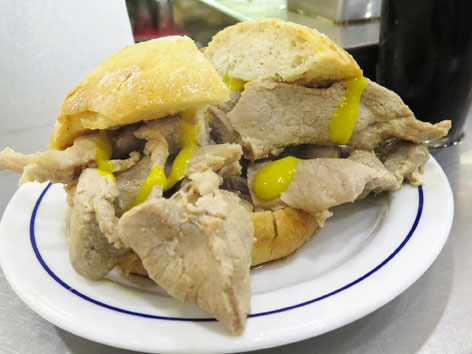 What: The Portuguese excel at sandwiches. As with soups, Portuguese sandwiches are simple, hearty affairs—nothing fancy, just tasty and filling. The classic bifana is no exception. It’s just thin slices of pork, grilled and then simmered in a garlicky stock, served on a soft bun and typically eaten with the most basic yellow mustard there is, plus chili sauce. But throw in a cold beer and a crowded Portuguese counter, and you’re in sandwich nirvana. It’s an absolutely ideal light meal, late-night alcohol-soaker, or anytime snack.

Where: Friendly, unassuming, and crowded, Cafe Beira Gare (21 342 0405; Praça Dom João da Câmara 4, map) is exactly the kind of place you want to eat a bifana. It’s a casual, brightly lit eatery with a long stand-up counter/bar, behind which you can watch the guys tending to the giant simmering pans of bifana. We just loved this place.

Order: A bifana (€2.70), and make use of the condiments (though the tender, slightly salty meat is delicious on its own). Definitely pair it with a beer, light or dark, here. This is a good place to try some popular Portuguese salgados, or fried snacks, as well: chamussa (aka chamuça, similar to samosa), croquettes, rissóis (fried turnovers).

Good to know: You know this is a national dish when McDonald’s gets on board. In 2013, the fast-food giant created a McBifana to get in on the fun. P.S. Don’t get it there.

Alternatively: Anthony Bourdain followers flock to O Trevo (21 346 8092; Praça Luis de Camoes 48, map), another bare-bones counter type of place that we’re sure is as “awesome” as he says. There’s also a handful of other spots with “bifana” in their name, like Casa Das Bifanas (21 342 1637; Praça da Figueira 6, map)—this dish would seem hard to mess up if it’s something you’re named for, so these are likely good bets, too.