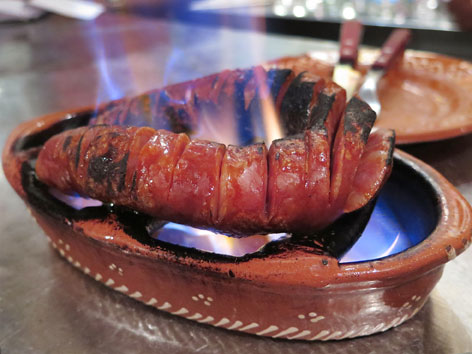 What: Very simply, this is flame-grilled chouriço sausage, Portugal’s less-spicy cousin to Spanish chorizo. Typically, a large link of the stuff is scored, placed in a special clay bowl (an assador de barro), doused in some high-proof alcohol (like aguardente), and lit aflame before your eyes. When it’s crispy and charred and hot inside—and the flames have ceased—it’s ready to eat, usually with bread, maybe some beer, and ideally a side of traditional music: A popular bar snack, chouriço assado is particularly common at fado clubs in Lisbon.

Where: We found our flambéed sausage at Tasca do Chico (Rua do Diario de Noticias 39, map), a small, popular fado bar in Bairro Alto with photo-plastered walls and amateur nights on Monday and Wednesday. Listening to fado, Portugal’s signature melancholy music genre, is a must in Lisbon, the city on whose streets it was invented. And this sort of laid-back environment seems far better than some of the more formal, buttoned-up, expensive fado bars around town.

Order: The chouriço assado (€10) is prepared and presented the traditional way here, and it’s quite good. And while we loved this fado bar, we will say this: It gets crowded and tight in here, and this dish heats up the surrounding area, so...might be best to order this in the cooler months at a bar like this. Caldo verde is another good order off the petiscos/tapas menu. As for drinks, we like our chouriço with beer, but this is a good spot to try Portuguese liqueurs like ginja or Licor Beirão.

Alternatively: This is the kind of dish you’ll stumble on frequently in Lisbon. Try other fado bars or small-plates eateries like Aldea (21 346 1370; Rua da Prata 155, map) in Baixa (downtown).