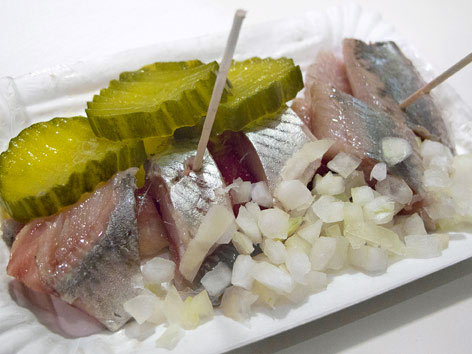 What: Tales of eating whole raw herring in the streets of Holland seem to spread like an urban legend—except, of course, they’re totally true (minus the “raw” part, as the fish are lightly brined). Herring from the North Sea fishery has played a huge role in A’dam for as long as the city has existed: Herring and beer traders were among the first to pass through the city’s network of dams and levees, and shortly after that, the Dutch invented herring curing, removing most of the guts post-catch so the fish lasts longer, and the herring trade exploded. The herring season starts in the late spring, which is when all the excitement over Hollandse nieuwe haring, or “new” herring (i.e., the first catch of the season), occurs, but since all herring is nowadays required to be frozen (to kill nematodes) following the catch, good fish is available year-round, as you’ll see in countless haringhuis (herring stands) and vishandels (fish shops) around town. (In fact, one herring vendor told us the herring is exactly as tasty in November as in June.) Being a fatty, oily fish, herring is typically very rich in flavor (and healthy omega-3s), but the herring you’ll find here—lightly cured in salt and, traditionally, the fish’s pancreatic enzymes—is quite mild and soft, not at all fishy. We loved it.

Good to know: You don’t have to make like the pictures and cardboard cutouts on some stands and eat the fish by holding it by the tail, throwing your head back, and lowering it whole into your mouth. In Amsterdam it’s more common to eat herring with toothpicks—often topped with a Dutch flag—in bite-size pieces out of a waxed cardboard plate, with chopped onions and gherkins (or pickles) on the side. You can also have the fish, onions, and pickle in a more filling broodje haring, or herring sandwich.

Where: Our herring is from Vishandel Molenaar (020-673-5955; Albert Cuypstraat 93) in the De Pijp neighborhood, where a local pointed us in the midst of Albert Cuypmarkt’s overwhelming options. It’s a shop, not a stand.

Order: Get the haring (€2,10) with onion and pickle on the side—too much of it distracts from the fresh taste of the fish. Silvery outside, pink and fleshy inside, it certainly looks raw, but its taste is surprisingly buttery, and its texture soft. We also tried some excellent smoked eel here.

Alternatively: Many haringhuis are known to have great herring. Two popular vendors are V.O.F. Vishandel Centrum (Haarlemmerdijk 4, map) and Stubbe’s Haring (Singel Haarlingersluis, map), both near Centraal Station. The stands in the Noordemarkt and Albert Cuypmarkt are also good choices. When in doubt, ask a local!