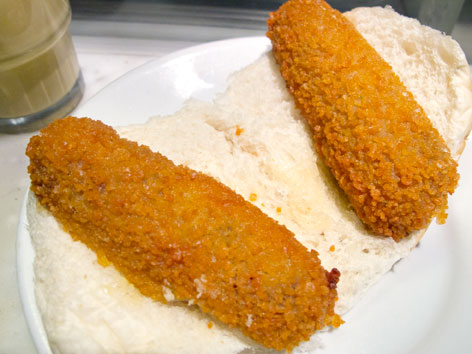 What is a Dutch kroket?

Kroket means croquette (which is the French name): breaded, deep-fried creamy balls filled with stuff. The Netherlands is among that select group of nations with a thing for these pop-in-your-mouth snacks, and Amsterdam is a fabulous place to try one. Of course, not all croquettes, or kroketten in Dutch, are created equal. The Dutch kroket is typically cylindrical in shape and filled with a meat ragout (most commonly using beef, beef broth, flour, butter or margarine, onions, herbs), and it epitomizes textural contrast: very crispy and crunchy on the outside, super soft and smooth inside, with chunks or strands of meat.

In Amsterdam, croquettes have long been an economical way of using leftover meat stews and roasts—mixed with gravy, rolled into logs, breaded, and fried. But the snack really took off during WWII, when they became mass-produced as a cheap foodstuff. Since then the kroket has been regarded mostly as a fast-food delicacy, a common item at the vending-machine-style automats around Amsterdam, where a popular game is wondering what the heck they’re really made of.

We say: Don’t overthink it. Kroketten are delicious served the Dutch way, with mustard and (optional) white bread. Here's where to find a good tasty kroket in Amsterdam.

Where to try kroketten in Amsterdam

One of Amsterdam’s two historic kroket players, Eetsalon Van Dobben (two locations including Korte Reguliersdwarsstraat 5-7-9), near Rembrandtplein, is a brightly lit lunchroom-type space famous for its kroketten and broodjes (Dutch-style sandwiches, named for the soft rolls they’re made with) since 1945. Its broodjes are as typical Dutch as you can get, filled with honest, meaty goodness like cold sausages, filet americain (raw minced beef, like tartare), liver, salt beef, or, of course, kroketten.

WATCH: A one-minute trip through Amsterdam.

Order: Pictured is the broodje kroket (€2,75), a simple two-croquette sandwich, with the requisite mustard on the side (we ultimately preferred the traditional rundvlees, or beef, version over the garnaal, or shrimp; also offered here is cheese, veal, and vegetarian). We suggest you ask for butter too, another common accompaniment.

This sandwich doesn’t look like much, but it’s pretty enjoyable, the roll providing another layer of soft-texture contrast, the butter adding delectable richness, the mustard spicing up the crunchy, meaty creaminess inside. If you want more food, try the bitterballen—this place does have a way with crispy, gooey balls of meat—a creamy broodje filet americain, or the popular hot roast pork sandwich with gravy.

Alternatively: The other big kroket maker in town is Patisserie Kwekkeboom (multiple locations including Reguliersbreestraat 36, map), also dating to 1945 (but said to have come before Van Dobben). There you might try the basic rundvlees, saté (beef and peanut sauce), or groenten (vegetable) kroket, as well as the tasty pastry-wrapped saucijzenbroodjes, sort of like a sausage roll. Slightly more refined is Patisserie Holtkamp (Vijzelgracht 15, map), also celebrated for its baked goods and kroket, particularly its garnaalkroketten (shrimp) and kalfskroketten (veal), though it has a vegetarian-friendly cheese (kaas) variety as well.

And, of course, at the other end of the spectrum is the down-and-dirty automat kroket, available from FEBO (multiple locations including Leidsestraat 94, map) outlets around town. Put in some coins, consider the wall of deep-fried offerings, and then take out a hot kroket of your choice (you’ll usually find beef, veal, sate, and a meatless vitaalje), or one of its brethren—the chicken-stick kipcorn, the beef-pork sausage frikadel, the cheese “soufflé” kaassoufflé. (Yep, all of them deep-fried, and all around €1,50.) The FEBO krokets are a bit thicker and crunchier on the outside, but still pretty fun to eat.

Turned off by this sort of thing? Try one after visiting a bar or coffee shop, when your wits are sufficiently dulled. It will hit the spot!