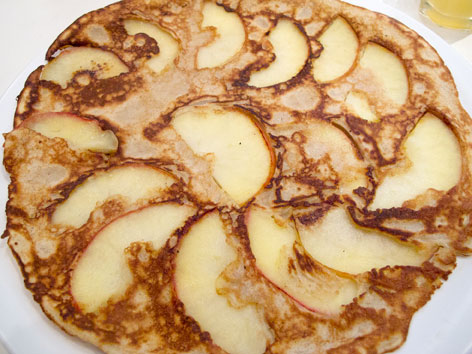 Pannenkoeken are Dutch pancakes, and they're high on the list of foods travelers seek out in Amsterdam. After all, the Dutch are one of many cultures to have a strong pancake tradition—that is, pouring egg-based batter on a griddle and making thin, round cakes from it. (Like elsewhere in Europe, in the Netherlands pancakes and waffles were long a pre-Lenten treat, according to The Oxford Companion to Food.)

The Dutch pancake (pannenkoek) is plate-size and thin, falling between an American pancake and a French crepe on the thickness scale. It is combined with many a sweet or savory topping: fruits (particularly apples), cheese, bacon, chocolate, sweet sauces, nuts, veggies, even smoked salmon and crème fraiche. Despite the crowds you’ll see at Amsterdam's pancake houses in the morning, pannenkoeken are more often eaten by the Dutch at lunch or dinner—mostly those houses cater to foreigners at that hour. But that doesn’t mean you shouldn’t join them.

Where: On a hip, pretty street, Pancakes Amsterdam (multiple locations including Berenstraat 38, map) is, as the name suggests, a great place to try pannenkoeken in Amsterdam. It's a small, sunny bi-level restaurant decked out in light woods. We love that the kitchen uses local Dutch flour and eggs, and organic produce when possible. Note: It can get quite crowded at times and no reservations are accepted.

Order: We went with a traditional apple pannenkoek (€6,50), for which the apples are sliced and cooked into the pancake; it tasted nice and fresh, crispy on the outside and moist inside. On the table were a few pancake condiments: powdered sugar, honey, Dutch stroop (a molasses-y syrup). We tried a few of the wilder pancake combinations, too, including the Camembert-chicory-ham-raspberry-sauce variety, and concluded that simpler was better (we recommend the Dutch pancakes part of the menu). Wash ’em down with a koffie or a locally produced apple juice. If you can stand more pancakes for dessert, try the sweet, buttery poffertjes too.

Alternatively: Most locals will tell you the best pancakes are found outside the city, and many of the popular pancake houses you’ll read about in Amsterdam are notoriously over-the-top touristy. Get out into the country if you can, or else you might try the more under-the-radar Pannenkoekenhuis Upstairs (Grimburgwal 2, map), a charmingly tiny purveyor of pancakes located up a very steep flight of stairs.

Download our new Amsterdam Food & Travel Guide to your Kindle, smartphone, or tablet and get the inside scoop on the best Dutch foods in Amsterdam, plus a bonus restaurant guide and 5-day EYW itinerary. $3.99