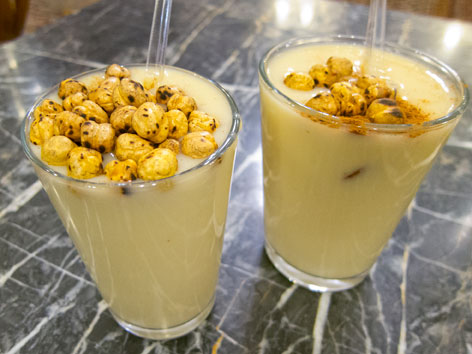 What: It's popular in winter and looks like eggnog, but its subtle tart tang gives it away: Boza is a traditional fermented drink usually made from wheat, millet, or bulgur. It’s an odd specimen. Chilled, thick as pudding, and at turns sour and sweet (sugar is added during the fermentation process), boza is typically served topped with cinnamon and crunchy roasted chickpeas. While it is slightly alcoholic (about 1%), vendors love to tout its health qualities: rich in vitamins A, B, C, and E, as well as lactic acid, a digestive aid (it’s recommended for pregnant women, even). Similar fermented drinks using various grains have been around for centuries in other countries, particularly in Central Asia and the Balkans; in Turkey, the drink has a long and controversial history: Dating to about the 10th century, it enjoyed high popularity before being banned (due to its then higher booziness) in the 1600s; it later came back to be a favorite drink of Ottoman sultans and army soldiers. While you can find boza in many cafes and grocery stores in Istanbul (bottled in the latter), it's well worth the effort to travel to its most famous dispenser to sit down and have a glass.

Where: At historic shop Vefa Bozacici (Katip Çelebi Cad. No.104/1, map), in the otherwise modernized district called Vefa, prepared glasses of boza, ladled by staff, await customers on the marble-topped antique wooden bar. This place, established in 1876 by an Albanian immigrant and run by his descendants today, is an experience unto itself: The walls are mirrored and the floor tiled, the staff seems to consist exclusively of burly mustachioed men, and a cup from which Atatürk, the founder/national hero of modern Turkey, once drank (in 1937) is enclosed in glass in one corner of the room. It has the feel of a nostalgic, well-worn, distinctly Turkish sundae parlor, where languidly spooning boza into one’s mouth over conversation just feels like the right thing to do.

Order: The boza here (3 TL for a glass; 9 TL for a liter) is made from fermented bulgur, water, and sugar; it’s thick and creamy enough to be served with a spoon and its taste is complex: sweet, sour, somewhat floral, nutty. The roasted chickpeas, or leblebi, are a must, not only for their flavor but also for the wonderful crunch they impart—they often have the legumes behind the bar, but the roasted-chickpea vendor across the street makes for a nice backup. It may be an acquired taste for some, but we loved it. Don’t plan on eating a meal right after—this stuff is filling, and can almost be a meal in itself. (Almost.)

Alternatively: There really is no alternative to going to Vefa in our book—but we imagine it would be fun to buy a cup of boza the old-school way, off a wandering street vendor on a winter evening, so keep an eye out for those guys too. (Incidentally, we’ve been told that those vendors sell relabeled Vefa boza anyway.)