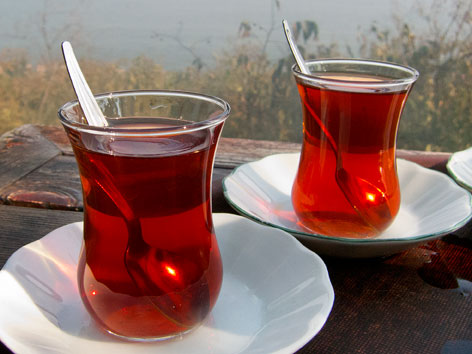 What: Çay (“chai”), or tea, is a way of life in Turkey, consumed at all hours and offered to all comers, whether you are in a cafe, a shop, a house, or a gas station—it’s the ultimate gesture of hospitality here. (By contrast, the well-known Turkish coffee, Türk kahvesi, while more historic, is drunk much less frequently.) Though the tradition seems fully ingrained in Turkish culture, and tea made its way here centuries ago via China and Japan, the tea craze is a relatively recent phenomenon: It wasn’t until the middle of the 20th century that, after several attempts, Turkey was able to cultivate its own black tea successfully—in the mild, rainy climate of Rize, a province in the northeast, on the Black Sea—and tea, a much cheaper alternative to coffee, became more popular to drink. Nowadays, Turkey is the fifth largest producer of tea in the world, and more tea is consumed here than in any other country. (Yes, including England.) Teahouses and tea gardens (ҫay bahceşi) have become essential to Turkish society, the place where locals—traditionally more men than women—leisurely play backgammon, relax, and converse among endless glasses of tea.

Tea here will often be served to you in glasses—elegant little tulip-shaped glasses that show off the liquid’s amber hue and, lacking handles, force you to warm up your fingertips—with two sugar cubes on the side. (Note that Turks never take milk with their tea.) At a teahouse or a tea garden, however, you’ll more likely be served a pot of tea, in a double-stacked kettle called a çaydanlık: The bottom kettle is hot water; the top is brewed tea, kept warm by the steam emanating from below it. It is customary to fill your glass about halfway with tea, pouring through a strainer, and then top it off with some of the water to dilute it. This is strong stuff.

Good to know: No matter how much of it you’ll see peddled as “traditional” in the Spice Bazaar, apple tea is for tourists and tourists alone. The idea was to make tea more palatable to foreigners, apparently. Consider yourself warned.

Where: There’s no question you’ll have many opportunities to drink tea while in Istanbul—a good thing, for it affords a quick break from walking, a jolt of caffeine, and a great way to partake in local culture. (Also: You can accept an offer of tea from a shopkeeper and not feel obligated to buy something.) But some tea gardens are lovelier than others, and the waterfront, al fresco Setüstü Çay Bahceşi (Gülhane Park, Eminönü, map) is one of them. Situated under gorgeous Topkapı Palace, and a short walk into leafy, historic Gülhane Park, it’s a true escape from the city’s bustle, quiet but for the tinkling of spoons stirring sugar—just you, your tea, and the Bosphorus.

Order: A copper pot of brewed tea for two is 14 TL; there are pots both larger and smaller than that. The tea was very good, but you’re paying for the views as well, and they’re worth it. Here is the part of the tea-drinking experience that’s about relaxing and recharging.

Alternatively: Everyone you meet will have their own favorite spots for tea. We’ve heard raves about İskele Çınaraltı Aile Çay Bahçesi (Çengelköy Cad. No. 2, map), a traditional waterfront tea garden in Çengelköy, on the Anatolian (Asian) side of the Bosphorus, that boasts both extraordinary views and a very local atmosphere. But we’ve also had great tea at countless no-name cafes—paired with, perhaps, a hot, just-baked simit—and on the street, where young runners offer tea off silver trays from tea houses down the road, affording the perfect opportunity to slow down and share a glass with whomever it is you’re chatting with at the moment. And that, of course, is largely the point of the stuff.