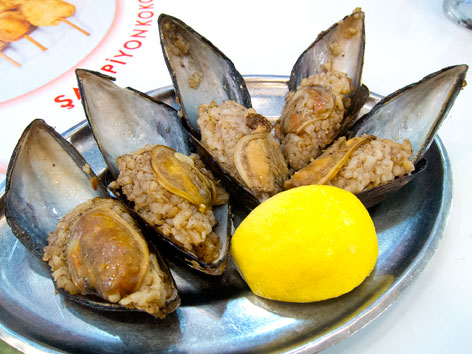 What: These mussels, midye dolma (“mid-yea dol-ma”) are stuffed with seasoned rice (often containing garlic, cinnamon, pepper, currants) and served in their shells with a lemon wedge. They’re a true street food in Istanbul, peddled from little stands—usually lined up like shiny black-and-yellow beacons on well-traveled sokaks—by industrious young men. Despite the bivalves’ famously inexact origins, they are very popular among Istanbulites, especially after-hours, when the savory, bite-size snacks especially hit the spot (just try to stop at three or four). If you have (quite valid) reservations about consuming shellfish on the street, there are plenty of other good, reputable places at which to indulge—and indulge you must, for these are ridiculously delicious.

Order: A porsiyon of midye dolma (5 TL for five pieces), which are presented with the orange mussel stuffed and perched on the edge of its shell, an elegant built-in spoon of sorts. The soft, aromatic rice; the slight chew of mussel; the brightness of the lemon—it’s a near-perfect bite of food. We did notice that these mussels had a lot more rice inside them than their street kin, making them less delicate but more filling.

Alternatively: There’s no guarantee of freshness—and many locals will tell you it’s dangerous—but you can try your luck on the street. We couldn’t resist the temptation ourselves, returning twice to a stand on Büyük Parmakkapı Sokak (opposite Marmara Café, map), off İstiklal Caddesi, where street vendors generally set up from about 4pm to midnight. The young man selling them for 1 lira apiece told us he had harvested them from the Marmara Sea himself but didn’t prepare them—his mother did.