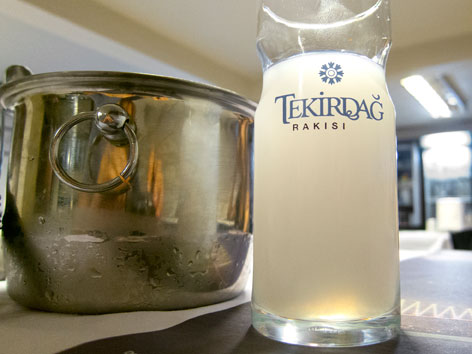 What: Rakı (“rah-kuh”), a strong, anise-flavored spirit made of twice-distilled grapes, is ubiquitous among Istanbul’s many meyhanes and drinking dens—no surprise, since it is one of Turkey’s unofficial national drinks and was a favorite of modern Turkey’s (secularizing) founding father, Mustafa Kemal Atatürk. While its taste calls to mind Greek ouzo or French pastis, it is more likely related to Middle Eastern arak, and probably crossed into Turkey a few centuries ago, during the Ottoman era, when Anatolian winemakers encountered the Arab world’s distillation methods and decided to use the residue of grapes left over from making wine (the signature aniseed was added later). It is a clear spirit, but like its fellow anise-flavored liqueurs, it turns milky once water is added for dilution, as it typically is (see below); this cloudiness and the overall potency of this drink have given it the nickname “lion’s milk.” A bottle (or half-bottle) of rakı is the traditional alcoholic pairing for many a meze—starting with the earliest to appear, typically kavun (melons) and beyaz peynir (white cheese)—and seafood meal in Istanbul, designed to be shared among friends and sipped on throughout the night. It’s not a cheap thrill; there are high taxes on alcohol in Turkey. But even if you don’t love the taste of aniseed, you gotta give this one a try for a night.

Good to know: Many an article has been written on “how to drink rakı” in Turkey, but it’s not that complicated. At a meyhane, you can have it neat if you’d like—your server will pour it into a kadeh, a short highball glass, for you—but this is a strong drink (40% or so ABV), so the uninitiated should probably accept the cold water that gets offered next. Add the water to your taste; it’s not uncommon to use equal amounts of water or more. Ice is optional, too. Serefe!

Where: No-frills basement tavern Çukur Meyhane (212-244-5575; Kartal Sokak No.1/A, map), in Beyoğlu, is just one of many good spots for rakı—mostly because the atmosphere feels low-key and authentic and the meze is delicious.

Order: A single glass of rakı goes for 13 TL here—but understand that this spirit is typically dealt with in terms of bottle sizes. Here there are 20 cl, 35 cl, 50 cl, and 70 cl sizes, ranging in price from 34 TL-104 TL and representing some of the most popular big brands: Yeni, Tekirdağ, and Efe. (Before 1944, when rakı’s production/sales were put under state monopoly and only Yeni brand was available, there were many other producers around the country. The industry was deregulated in 2004, but there are still no small rakı producers.) At Çukur, locals can leave unfinished bottles behind in a refrigerator, names scrawled across a piece of tape on top, to wait for their next visit. It goes without saying that you should also sample generously from the cold and hot meze menus; get some fish here, too.

Alternatively: Any meyhane will do; we happen to also like Asmalı Cavit (212-292-4950; Asmalı Mescit Cad. No.16/D, map) in Beyoğlu, Karaköy Lokantası (Kemankeş Cad. No. 37, map) in Karaköy, and İsmet Baba (216-553-1232; Çarşı Cad. No.1/A, map), on the Bosphorus in Üsküdar. Remember that it’s not really about the place or even the taste of the particular rakı you’re drinking in Istanbul—it’s about the company and the conversation, the eating and drinking and celebrating and soul-sharing that may follow. Great food is a plus, of course.