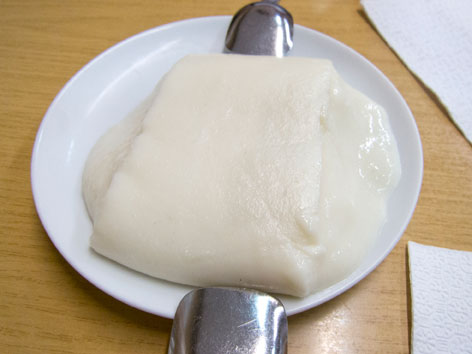 Tavuk göğsü translates to “chicken breast pudding,” which sounds stranger than it is: a creamy, milky-sweet, fibrous pudding that we find absolutely delicious. It just happens to be made with rice flour, milk, sugar, and boiled, finely shredded chicken.

Taste wise, it’s not too far off from a rice pudding, and it is sometimes likewise dusted with cinnamon, but its texture is totally different—stickier, stringier, denser. And then there’s the ever-so-subtle taste of poultry. (While the meat is used as a thickening agent, not for flavor, we still detected it, in a not-at-all-off-putting way.) An Ottoman dish once served to the sultans of Istanbul’s palaces, tavuk göğsü is a royal treat.

Where: Tucked off the narrow streets of hip Cihangir, old-school Özkonat (212-249-1307; Akarsu Cad. No. 46/B, map) is clearly a holdover from a past generation—and a local gem at that. Dating to 1963, it’s both a lokanta (casual restaurant), with a steam table in the back, and a muhallebi evi, or custard house, the mysterious milky-white plates of which are displayed in a glass window at the front, viewable from the street. Their looks alone might not lure you inside, but trust us—you want to eat them.

Order: The tavuk göğsü (6 TL) is a true pudding, sweet and milky with a uniquely gooey, fibrous texture. Spoonful by spoonful, it disappeared before we knew it. There are lots of other great desserts to try here—next time we’ll follow Istanbul Eats’ advice and also order the kazandibi, another milky-sweet pudding with a caramelized-sugar exterior.

Alternatively: Established local chain Saray Muhallebicisi (multiple locations including the 1935 original at İstiklal Cad. No. 173, map) carries tavuk göğsü, kazandibi, and other puddings, but in general look for it at shops calling themselves muhallebecisi orpastanese (pastry shops).