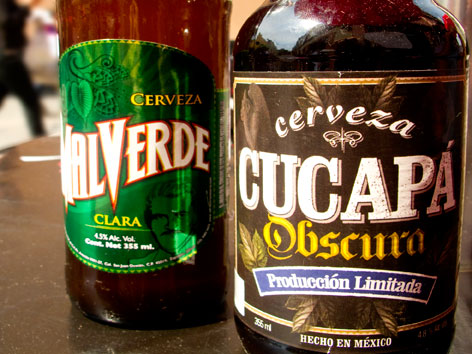 What: Mexico has a huge beer culture, but so many of the beers people know and love—Dos Equis, Tecate, Corona, Modelo Especial, Pacifico, Sol, etc.—are owned by two mega brew companies (FEMSA Cerveza and Grupo Modelo) that are only getting bigger, merging with international beer companies and losing perhaps a bit of their Mexicanness in the process. There is, however, an exciting but still under-the-radar craft beer industry in Mexico that’s definitely worth seeking out—brew pubs, excellent beer stores, and a dozen or so microbreweries that move well beyond the usual Mexican pale lager. Among the big players in these small breweries are Cervecería Primus, located just north of D.F. and celebrated for its delicious double malt; Cervecería Calavera, based west of the city and producing an intriguing selection including a witbier, a Mexican imperial stout, and a Belgian Abbey triple-style ale; the Guadalajara-based Cerveceria Minerva, whose offerings include an imperial stout and pale ale; and Mexicali’s Cucapá, whose barley wine, pale ale, and even light beer garner very favorable reviews. Although the breweries are scattered across the country, the bars and shops of cosmopolitan Mexico City are your best bet for tracking down many of the regional cervezas artesanales—if you know where to look.

Where: Our favorite spot to drink and learn about Mexican beer in D.F.: beer store-cum-tap room El Deposito (multiple locations including Av. Baja California 375, map), on the edge of Col. Condesa. It is a joint venture between two craft breweries (Minerva and Primus, the producer of Tempus beers) that, besides providing taps for their own beers, acts as a tasting room for others. There’s a whole shop’s (and refrigerator’s) worth of interesting bottles—about 120 at last count—on offer from other breweries, both domestic and imported, making it especially beloved by expats seeking their favorite overseas brew. It’s also a very cool, open-air, cement-floored space, modeled in the Prohibition-speakeasy style, that’s run by a couple of young, passionate dudes (most of whom speak English well, FYI). And there’s popcorn and tasty burritos to boot.

Our photo, however, is from another bar/restaurant carries a good amount of Mexican crafts: El Black (Regina 43, map), located on an up-and-coming pedestrian row in el Centro. It looks like your typical small comida corrida type of restaurant, except the walls are lined with beer bottles and the back refrigerator is usually filled with brews from Cucapá, Minerva, Calavera, and more. That’s right: This little restaurant has a beer fridge. Score!

Order: Try as many craft beers as you can—with limited exceptions in a few U.S. border states, this could be your only chance (for now). We especially loved Primus’s rich , strong, award-winning Doble Malta; Cucapá’s clean-tasting Obsura; and Calavera’s wonderful Tripel de Abadia (triple abbey ale).

Alternatively: La Nacional (Calle Orizaba at Querétaro, map) in Roma Norte has a promising list; however, during our visit it didn’t have most of its beers in stock. You will find craft beers offered at some top-end restaurants here—notably, the excellent Pujol (Francisco Petrarca 254, map) in Col. Polanco—but they will come at a steep markup. If you don’t mind traveling a bit, do a tasting at Beer Factory (multiple locations including Centro Comercial Santa Fé, 2nd floor, Vasco de Quiroga 3800, map), a Mexico City-based restaurant/brewpub franchise where the beer is housemade and claims adherence to Germany’s beer purity law, Reinheitsgebot; its chocolatey Luna Llena stout is a winner (see also: local fruit beer). See this list for a more updated list of craft-beer bars in Mexico City.

Beer stores: If you have another place to drink, want some good old-fashioned beer education, or just want to scratch your head and think, “This is Mexico?” (in a good way), head to the takeout-only La Belga (Querétaro nr. Orizaba, map) in Roma Norte, a terrific little garage-like shop with Mexico’s biggest catalog of domestic and imported craft brews run by a knowledgeable and multilingual Frenchman (with, as the name suggests, some Belgian heritage). There’s also the well-stocked Beer Box (multiple locations including Condesa: Francisco Márquez 129, map) franchise, another store bringing good brews to D.F.