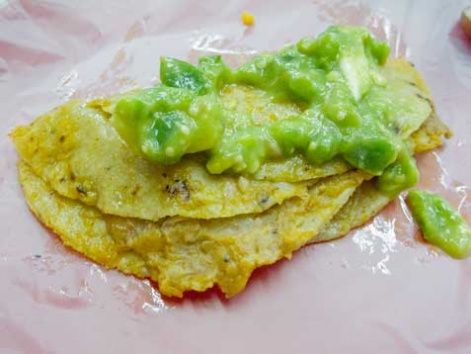 What: “Tacos of the basket,” literally, are steamed tacos, a popular mobile treat often served by people on the street out of cloth-covered baskets. They’re soft and moist, with fillings such as chicharrón, mole verde, potato, refried beans, shredded chicken, and carnero en adobo (spicy mutton/sheep). They’re sometimes (rather unappealingly) called tacos sudados—“sweated tacos”—tacos al vapor, or tacos mineros in other parts of Mexico, the latter referring to its origins as a common packed lunch for workers in mining country.

Where: In el Centro Histórico, a half-block from the grand Zócalo and magnificent Catedral, Tacos Los Especiales (Francisco I. Madero 71, map) does excellent tacos de canasta out of plastic-covered stainless-steel “baskets.” You may also run into one of its mobile vendors around the city.

Order: We liked the tacos with frijoles refritos—refried beans—which were super soft and somewhat mushy, but very tasty (4p). We’d try any of the varieties here. Use the excellent guacamole liberally.

Alternatively: The chain of vendors called Tacos Canasta La Abuela (multiple locations including Rio Lerma at Rio Rhin, map) in Col. Cuauhtémoc, north of the Zona Rosa, is another good source of these.