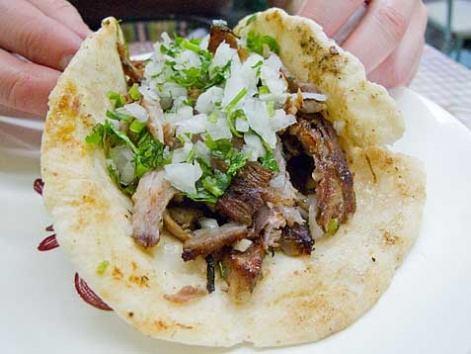 What: Tacos árabes, along with their cousin tacos al pastor, are the most obvious gastronomic influence—at least on the street—of the Lebanese immigrants who started flocking to Mexico (primarily to nearby Puebla) in the late 19th century. It’s basically that delicious al pastor pork in a slightly different marinade (no achiote, for one thing), shaved off the vertical spit and nestled into toasted pan árabe, or soft pita-like bread, instead of a corn tortilla—kind of like a Mexican shawarma.

Where: Two blocks from Parque México, Taqueria El Greco (52-55-5553-5742; Michoacán 54, map), slicing and serving “doneraki” tacos since 1976, is popular for its tacos árabes. The cramped narrow space has a few tables, or eat on the street in front of the taquero.

Order: A taco árabe (24p), served with chopped onion and cilantro. El Greco also does tortas and some interesting taco riffs, like the gringa en pan árabe con queso, which places meat and cheese between two pieces of pita that are pressed and quartered like an American-style quesadilla.