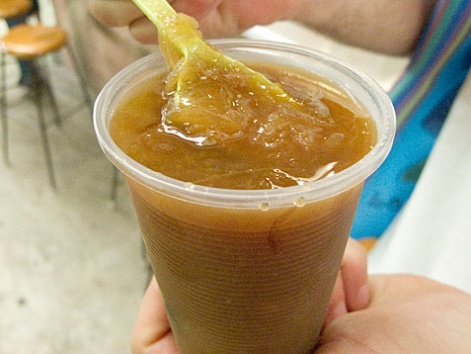 What: A cold, slightly sweet, refreshing drink made of stringy squash (figleaf gourd, itself called chilacayote locally, which is common in Oaxacan cuisine) and pineapple pulp, usually sweetened with honey and cinnamon. It is served with a spoon to best scoop out the delicious squash.

Where: We found a friendly chilacayote vendor in the middle of Mercado Benito Juárez (Miguel Cabrera at Las Casas, map).

Alternatively: Also in Benito Juárez, a puesto called Casilda (no. 30-31), selling all kinds of fruit drinks, has chilacayote. In general, look for this wherever tejate is sold; it’s commonly offered alongside that drink.