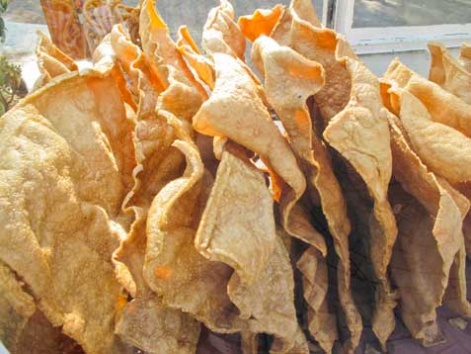 What: Chicharrón, or fried pork rinds, is found around the world in various forms. In Mexico, you can find it made with flour or actual pork skin, crisping up dishes like tacos, sold as sheets on the street or in markets, and served as free (processed flour) snacks at cantinas, tasting like crunchy rice crackers accompanied by lime and hot sauce. In any form, it’s a yummy snack on the go or with a beer.

Where: You’re likely to run into chicharrón at a cantina—where it’s usually the bright-orange, out-of-the-bag flour variety—or in big sheets (pictured, on the street in Mexico City; 20p for a bag) in markets or from street stalls, with a light brown hue. This chicharrón was sold alongside churrumais, little fried corn snacks, as well as potato chips, which were served with hot sauce, salt, and lime (“better in Mexico,” according to the vendor)—thus meeting all your fried street-snack needs.