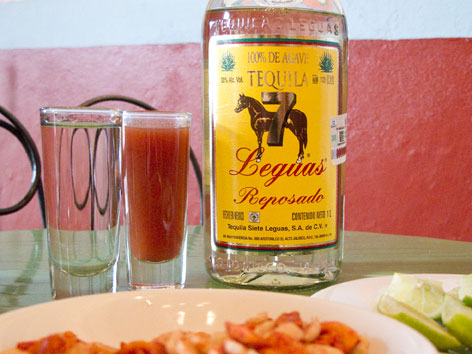 What: Tequila, by definition, comes from the area of Mexico surrounding the city of Tequila—primarily within the state of Jalisco, as well as limited regions of Guanajuato, Michoacán, Tamaulipas, and Nayarit—but it is, of course, found all over Mexico (and North America in general, for that matter). It is made with blue agave only—and in fact, better tequilas will be labeled 100% agave—and produced using a steam-cooking method, unlike its cousin mezcal. There are four main types of tequila to be aware of: blancos (“white”), the youngest, clearest, and generally purest; reposados (“rested”), also clear but aged up to a year in oak barrels; añejos (“aged”), deeper in color and aged for up to three years; and extra añejos, the newest denomination that means it’s aged for more than three years. Older, however, does not necessarily equal better when it comes to tequila; other factors, like small vs. large batch, multiple distillations, and altitude, affect quality. While it’s come a long way from its spring-break reputation in the U.S.—that which is synonymous with salt and lime and vicious hangovers—there is certainly a lot of discrepancy on the market between those cheap, harsh tequilas and the pricey, mind-blowingly smooth tequilas you can find more easily today.

Where: Our photo is from a beautiful former colonial house turned restaurant and tequilaría called La Casa de las Sirenas (República de Guatemala 32, map) in Mexico City’s el Centro Histórico, a stone’s throw from the Zócalo, Catedral, and ancient Templo Mayor. A bit overpriced (not surprising given the location) but with a solid list of 75 or so tequilas and killer views from the upper floors and roof.

Order: Una tequila. Our 7 Lenguas Reposado cost 85p and was accompanied by the usual spicy peanuts, lime, and sangrita, a chilled tomato-based concoction meant as a chaser/co-sipper.

Good to know: Some top brands to look out for include Casa Noble, Tesoro, Chinaco, 7 Lenguas, Ocho, and Don Eduardo, though you’ll never do too poorly with a good Don Julio or Herradura.

Alternatively: Most cantinas will have a decent tequila selection—some favorites in D.F. are Restaurante/Bar Montejo (4 Sur Benjamín Franklin 261, map) and Centenaria (Vincente Suarez 42, map), both in Col. Condesa; and the 90-year-old, Jalisco-descended, touristy-but-fun Salon Tenampa (Plaza Garbialdi 12, map) in el Centro. When in doubt, seek out an upscale restaurant—in D.F., one like the terrific Pujol (Francisco Petrarca 254, map) in Col. Polanco—as those are likely to carry an excellent tequila list.