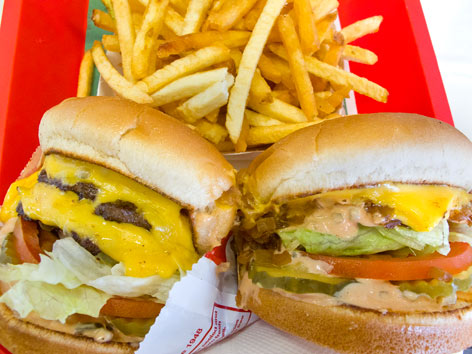 What: Southern California has a lot of people and a lot of cars, so it’s only natural that people would want to eat in their cars every now and then—especially when it comes to America’s favorite fast food, the hamburger (or cheeseburger, which was allegedly invented in Pasadena in 1926). In the old days, when customers wanted to eat in their cars at a restaurant, someone called a carhop served them. It wasn’t until about 1951—most sources credit Long Beach’s Jack in the Box as the first—that two-way intercoms were introduced, making fast food even faster. But while Jack is still going strong, the regional drive-through burger chain that opened just before it—in 1948, in the L.A. suburb of Baldwin Park—is the area’s most beloved.

Where: From its humble beginnings in Baldwin Park, In-N-Out Burger (multiple locations including 9245 Venice Blvd., map) and its famous “secret” (but not secret) menu has become nearly synonymous with fast food in the West—with more than 250 locations in California, Arizona, Nevada, Utah, and Texas—but particularly in Southern California. It doesn’t attract obsessive fans only because the burgers are damn tasty (and cheap) either: The company has always placed a premium on cooking to order with natural, fresh ingredients; it’s still family-owned and highly localized (to the chagrin of East Coasters) after all these years; and it’s known for treating its employees well, including paying more-than-minimum wages. That’s three more really good excuses to eat a burger in your car! (Of course, most locations also offer indoor/outdoor seating these days.)

Order: Everyone’s got their favorite, but if you’re a newbie, do check out the not-so-secret menu online before you go. Our favorite is the Double-Double burger “Animal” style ($3.20), which is two thin all-beef patties (cooked in mustard when Animal style), two slices American cheese, lettuce, tomato, fresh or grilled (optional) onions, pickles, and lots of “spread,” the pink Thousand Island-like sauce that goes on every burger—all crammed into a soft, fresh-baked, toasted bun (and if you think that’s a lot, consider the 4x4: four patties and four slices of cheese). Messy and oh so delicious, this burger is pictured above with the vegetarian-friendly grilled cheese Animal style ($2.05)—all the same goodies, minus the meat. For the full experience, round out your meal with fries and a shake. Then promise yourself some exercise...later.

Good to know: Apart from the not-secret menu, there are always more ordering possibilities at In-N-Out, if you want, say, chopped hot chilies on your burger, your fries Animal style, or a true veggie burger (no meat or cheese). And you are remarkably welcome to further customize things: extra-crispy fries, untoasted bun, cold cheese, whole grilled (instead of chopped) onions, extra tomatoes or lettuce. Check this site for more ideas.

Alternatively: There’s really none better than In-N-Out, and you can’t help but run into one if you’re in the L.A. area. But it’s only fair to mention Jack in the Box and Carl’s Jr. as fellow old-timer SoCal-born burger joints. Jack is 60 years old, originally from San Diego, and still primarily a West Coast thing—but it’s now in 18 states, including two on the East Coast (the Carolinas). Carl’s is about 70 now, with roots as an L.A. hot dog stand (and burgers showing up in Anaheim five years later); there are 1,000-plus branches now, still entirely in the West and Southwest of the country (plus Alaska and Hawaii!). Additionally, Bob’s Big Boy restaurant was born in the Los Angeles area, in 1936, but is now headquartered in Michigan; most of its franchises are clustered in the Midwest and California, including a vintage 1949-built Burbank location (4211 W. Riverside Dr., map).