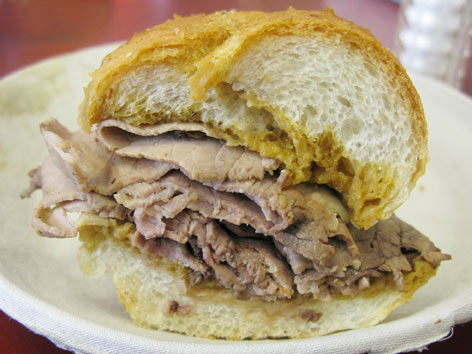 What: According to local legend, the “French-dipped sandwich” was born in Los Angeles, at one of two city institutions that still churn out countless meaty, jus-dipped, French-roll sandwiches daily. It’s a gloriously unadorned yet satisfying sandwich, and an L.A. must for any respectable carnivore.

Where: The story told at Philippe The Original (1001 N. Alameda St., map), which claims to be both the French dip creator and L.A.’s oldest continuously operating restaurant (although it’s moved its location), goes something like this: In 1918, a decade after setting up shop, owner Philippe Mathieu, a French immigrant, accidentally dropped the French bread he was slicing into a juice-filled roasting pan, and the customer—allegedly a policeman, possibly with the name of “French”—said he’d eat the “dipped” sandwich anyway…and loved it (and we have three guesses as to why it’s called “French” dipped). There are several other competing origin stories out there, but in any case, today the no-frills, sawdust-floored, always-crowded deli-diner carves roast beef, roast pork, leg of lamb, turkey, and ham for some 20,000 French-dipped sandwiches a week.

When: Daily, 6am-10pm. There’s nearly always a line, so expect at least a short wait.

Order: We like the flavorful beef ($6.50) or lamb ($8) sandwich, double-dipped (you can get it single-dipped or “wet,” too) in the rich pan drippings (which is mixed with a flavorful beef stock nowadays)—but have heard good things about the pork as well. A few cheeses are available for the sandwiches too, if that’s your thing. Dab a little of the fiercely hot house mustard, 80 gallons of which are made here each week, on the sandwich—not too much or you’ll regret it—and maybe try a pickled egg for some sweet-and-sour on the side. Pickled pig’s foot is another old-timers’ favorite. Incidentally, there are good home-style desserts here, as well as a decent wine list.

Good to know: The spicy mustard is available for purchase at Philippe’s for $4.25.

Alternatively: In contention with Philippe’s is Cole’s (118 E. 6th St., map) downtown, which also claims to have invented the French dip sandwich. More saloon than diner, Cole’s likewise was born in 1908; its French dips—beef, turkey, lamb, or pastrami—are served with a pickle and cup of au jus on the side. If you could care less about the history or prefer a more gussied-up version, you might try the $22 prime rib French dip (with fries) at mini-chain Bandera (11700 Wilshire Blvd., map) in Brentwood.