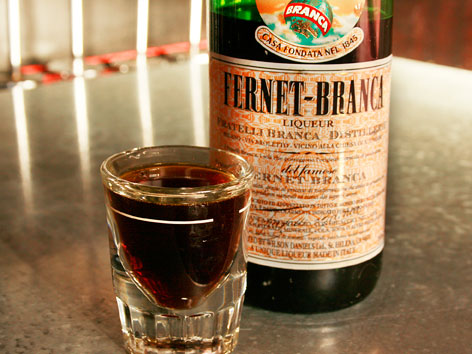 What: Black as tar and maybe just as bitter, Fernet-Branca is an amaro (that’s Italian for “bitter”) that’s flavored with a secret mixture of some 40 herbs and spices. Fernet is the name of the amaro itself, while Branca is the family name of the distillery—there are other Fernets out there, but the Branca brand dominates the market, in San Francisco and beyond. Despite its Milanese origins, the 80-proof liqueur has deep roots in this city: After Argentina, where Italian immigration spiked after WWII, San Francisco consumes more Fernet than almost anywhere else in the world, and significantly more than elsewhere in the U.S. (35% of bottles imported to the U.S. are sold in San Francisco). So why the cultlike attachment to this love-it-or-hate-it spirit? Well, it’s kind of a mystery, but we definitely have the Italian-American community and Prohibition to thank—Fernet was one of the few alcohols allowed here during that time, thanks to its supposed medicinal qualities—as well as service-industry insiders. For some reason, Fernet has long been an industry favorite here; chefs tend to love it (as a digestif, mostly) and bartenders will throw it back post-shift, or even pour it in espresso cups for sneaky work-time sips. From there it’s caught on with the younger bar-going generation, perhaps because it’s been touted as a hangover cure, or even a hangover preventer, if you don’t mix it with the wrong things.

Suffice it to say, it’s hard to avoid a shot of the strong stuff during a night out in San Francisco—and if you’re here as a visitor, you shouldn’t avoid it—so brace yourself: With distinctive flavors of anise, menthol, aloe, galangal, and saffron, it can act as a digestif, a refreshing breath cleanser, an extremely bitter sip, or a slap in the face (the latter seems to be most people’s first reactions). It’s an acquired taste for many, intensely herbaceous and, unlike most amaro, containing no sugar—think Jagermeister without the sweetness. Fernet is so ubiquitous these days that you’ll even find it on tap at a few of the city’s drinking dens, and even crafted into delicious, well-balanced cocktails.

Where: Bullitt (2209 Polk St., at Vallejo St., map), a rowdy bar on Polk Street known for its wild weekend nights, keeps its Fernet on tap. Do a round with some friends and see who loves it and who hates it (there will be very little middle ground).

Order: A shot of Fernet ($7). Whether you sip or shoot is up to you, or the company you keep. Wash it down with a good local brew—we think the great hop-heavy flavor of Speakeasy’s Big Daddy pairs nicely.