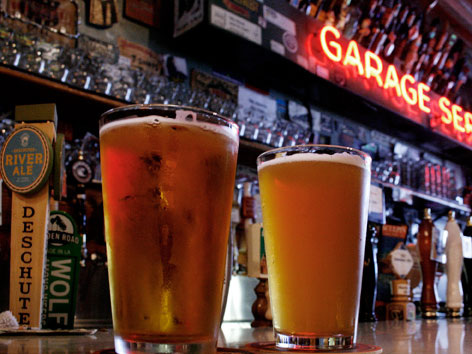 What: San Francisco may be in close proximity to wine country, but there’s no doubt it’s a beer-lover’s town. With countless craft breweries in the city, the Bay Area, and Northern California in general, there’s an incredible variety of beers and places to get them: local breweries, brewpubs, specialty beer bars, and beer stores where you can sample the goods. What’s more, these spots tend to be staffed with incredibly knowledgeable beer wonks who can fill you in on brewery information, beer styles, and even San Francisco beer history. While the city’s locally produced brews run the gamut of alcohol-heavy Belgians to easy-drinking pale ales, the types of beer most associated with the Bay Area are big, crisp, hop-heavy IPAs—at least partly because of the vast proliferation of locally grown hops. But there’s more to the beer scene here than that, from “farm to barrel” brews to history-minded steam beer. Read on and get thirsty.

Good to know: Anchor Steam from Anchor Brewing, which has been open in the city in one form or another since 1896, is inspired by the original San Francisco beer “type”—effervescent steam beer, likely called so for its primitive, pre-refrigeration method of fermentation (by lager yeast) on the city’s rooftops, where the cool, foggy night air is said to have naturally cooled the warm fermenting beer, creating steam. Nowadays, Anchor has trademarked Steam beer; the process still involves lager yeasts and warm fermentation temperatures, but not any rooftops.

Where: With all the breweries and brewpubs, it’s hard to know where to start exploring Bay Area beer culture. To become better acquainted with a wide range of local brews, we recommend a trip to Toronado (547 Haight St., betw. Fillmore & Steiner, map), a killer beer bar located in the Lower Haight neighborhood. From the frequently rotating tap list to the heavy metal on the jukebox, Toronado has a divey atmosphere and an enviable beer selection. Check the board hanging from the ceiling to the left of the bar, and don’t be afraid to ask for recommendations.

Order: Whatever looks good that’s from Northern California. Pictured are glasses of Pliny the Elder, a classic, crisp IPA from Russian River Brewing in Santa Rosa, and the golden, piney Proving Ground IPA from San Francisco’s own Magnolia, see below ($4-$7 a pint), but you are likely to find a wide range of regionals here, from Anchor, Drake’s, Almanac, Moonlight, and more (including, naturally, Chico-based Sierra Nevada, whose hops-rich pale ale is as common in San Francisco bars as Budweiser might be elsewhere).

Alternatively: Visit a brewery, many of which have tasting rooms or full-service bars, another beer bar, or a beer store.

Other SF beer bars: If Toronado is packed (which it often is!), there are plenty of other great beer bars in which to explore the glory of Northern California craft beer. Divey Church Key (415-986-3611; 1402 Grant Ave., betw. Union & Green Sts., map), a pocket-size bar in North Beach, has a rotating tap selection and a killer soundtrack, while Zeitgeist (199 Valencia St., at Duboce, map) is a rowdy biker bar with a massive back patio and an enviable draft selection (almost all of which is available by the pitcher). Mikkeller Bar (34 Mason St., betw. Eddy & Turk Sts., map) has become a downtown drinking destination, with a stellar selection of brews, a sleek atmosphere, and a tasty food menu to boot. In your travels about town, keep an eye out for offerings from San Francisco-based Almanac Brewing, which isn’t open for public visits but puts out seasonal “farm to barrel” beers using produce from local California farms (think strawberries from Santa Cruz, honey from Sonoma, and even San Francisco-produced Dandelion chocolate).

Beer stores: If you have an apartment, you may want to stop by Healthy Spirits (multiple locations  including 2299 15th St., at Castro, map), one of the city’s best beer stores, to stock up your fridge with local bottles, or head to City Beer Store (1168 Folsom St., betw. 7th & 8th Sts., map), where you can either purchase bottles to go or hang out and sample the brews on draft.