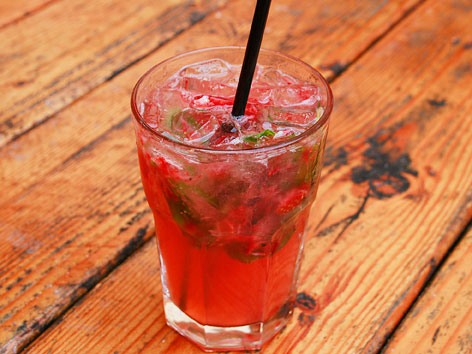 What: Craving a Gold Rush cocktail to go with your Barbary Coast eating tour? Look no further than pisco punch, a fruit-laced, dangerously drinkable concoction that’s appeared on San Francisco bar menus since the late 19th century. Pisco, a grape-based brandy from Peru, made its way here in the 1830s as part of the cargo on a trading ship hailing from the town of Pisco. For thirsty miners, the arrival of this boozy distilled liquor was a godsend, and soon it was available in bars across town, including one called the Bank Exchange & Billiard Saloon, which opened in 1853 and served a number of fashionable-at-the-time booze-laced punches. Pisco made its way into a number of them. In 1893, Duncan Nicol, then owner of the Bank Exchange, created the recipe for pisco punch that’s most widely replicated today, involving a heady amount of pisco, crushed pineapple, lime juice, sugar, and water. While Nicol’s exact recipe has been lost, you can find iterations of his punch to this day.

Where: We love the seasonal takes on pisco punch found at Dr. Teeth and the Electric Mayhem (2323 Mission St., betw. 19th & 20th Sts., map), a friendly, lively bar with a great back patio and a crave-worthy bar food menu.

Order: Strawberry pisco punch ($10). Here, you’ll find Kappa pisco mixed with fresh strawberries instead of the usual pineapple—the sweet, refreshing flavor profile is similar, with a balanced herbaceous flavor profile. Bonus: It’s available by the glass or the pitcher ($60), so you can share with friends, or make some new ones.