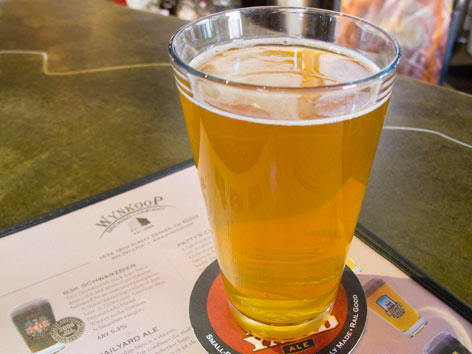 What: The “taste of the Rockies” certainly extends far beyond MillerCoors, based some 30 minutes west of downtown Denver in Golden, Colorado. Denver itself is said to brew more beer than any other U.S. city, so expect to find a slew of microbrews and the bars that love them, especially in LoDo’s former warehouse district (within the state of Colorado are hundreds more). Every fall, Denver is home to the biggest celebration of U.S. beers, the 30-year-old Great American Beer Festival (GABF), and that ain’t the only reason the city’s been called the “Napa Valley of Beer”: Even the mayor (now governor) founded a brewpub here.

Where: In downtown Denver, several microbreweries are within easy walking distance of one another—and, conveniently, Coors Field, if you’re headed to a baseball game. We started at Wynkoop Brewing Company (1634 18th St., map)—Colorado’s first brewpub, est. 1988, founded by Gov. John Hickenlooper in his pre-politics days, and the one largely credited with revitalizing the LoDo district—for a pint of its Denver-appropriate specialty, Patty’s Chile Beer ($5.25; pictured), a light and spicy German-style brew made with Anaheim chiles and smoked ancho peppers. You might also try its flagship Railyard Ale, a smooth session beer (now available in cans throughout the metro area), the refreshing Wixa Weiss (a two-time GABF medal winner), or (when available) the heady Metacool Maltuwanna, a malty amber ale brewed with hemp seeds (no, you won’t get high). The beers here regularly do well at the GABF, and the sprawling pub, complete with upstairs billiards parlor, is pretty awesome.

More microbreweries & brewpubs: Near Wynkoop is the Denver brewpub outpost of Breckenridge Brewing (2220 Blake St., map), which opened here in 1992; Breck now distributes in 26 states, including Colorado (Breck is also responsible for the awesome new Ale House at Amato’s, see below; plus there’s a Bar-B-Que restaurant and tasting room at Breckenridge’s brewing and bottling plant at 471 Kalamath St., map). Then there’s the award-winning Great Divide Brewing (2201 Arapahoe St., map), est. 1994, with a dedicated tap room and innovative concoctions like a smoked porter and an oak-aged stout infused with locally roasted espresso. Among the more traditional brewpubs around here are Rock Bottom Restaurant & Brewery (multiple locations including 1001 16th St., map), which is a family of breweries across the country (though no two branches’ beers are ever exactly the same), and mini-chain Chophouse & Brewery (1735 19th St., map).

Good to know: Want more history and beer-making background? The Denver Microbrew Tour ($29; reservations required) will take you to four of LoDo’s breweries in about two hours with an informative guide.

Beer bars: If you can’t decide which brewery to visit, head straight to the new Ale House at Amato’s (2501 16th St., map), opened by Breckenridge Brewery in spring 2011. Not only do 37 of its 42 craft beers on tap hail from Colorado (including lots from Denver), but the two-floor Lower Highlands (LoHi) restaurant-bar has CO wines, cocktails featuring state-made spirits, and a killer rooftop patio with great views of the city. Or you might scratch some locals off your list at the Falling Rock Tap House (1919 Blake St., map), a LoDo pub boasting a constantly changing selection of 75-plus beers on tap and 130-plus bottles, including Denver offerings and plenty from other Colorado brewers (New Belgium, Dry Dock, Odell, Avery, Left Hand, Ska, and more). Likewise, there’s the funky steampunk Rackhouse Pub (208 S. Kalamath St., map), housed in a whiskey distillery, where the regional beer list seems as carefully curated as the selection of local moonshine. Finally, while dining at the inimitable Cherry Cricket (2641 E. 2nd Ave., map), we noticed that its own beer list includes brews from Breckenridge, Great Divide, Odell (of Fort Collins), and Wynkoop (a sister establishment)—in addition to lots of Coors, Bud, and Miller, of course.