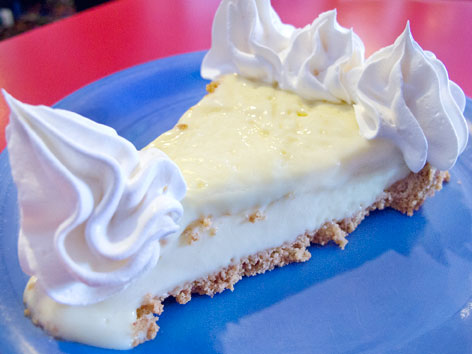 What: The default dessert of the Florida Keys is, of course, the famous key lime pie, thought to have been created in Key West in the late 19th century. Variations are aplenty, but mostly you’ll find a graham-cracker crust, a yellow custard (primarily eggs, sweetened condensed milk, and key lime juice), and a topping of either whipped cream or meringue. Just about any place serving food in the Keys will carry this pie, though unfortunately the same can’t be said of the tart key limes themselves, small, yellowish orbs also known as Mexican or West Indian limes: They haven’t been commercially grown in the Florida Keys in decades, mostly thanks to damaging hurricanes and citrus canker. You’ll still see them in backyards down here, but those restaurant pies are likely made with imported limes or bottled juice from Mexico and points south. Regardless of where the limes are grown, however, this pie is as Florida Keys as it gets—a sweet, tart, cooling remedy for sunny, sultry days.

Good to know: This pie’s use of sweetened condensed milk, an essential ingredient, is probably tied to its location of origin: Fresh milk and refrigeration were uncommon in the isolated Keys until the Overseas Railroad (1912) and Highway (1938) opened up.

Where: Among the many worthy food stops on the Overseas Highway is Mrs. Mac’s Kitchen (two locations including the original at 99336 Overseas Hwy/MM 99.4 S. U.S. Hwy 1, map) in Key Largo, a classic diner with down-home charm.

Order: The key lime pie (slice/whole, $4.95/$20, or $15 to-go) is cool and whipped-cream-topped in Mrs. Mac’s version, with a delicious graham cracker crust that does wonders in the crunchy-texture department. You might also consider the “key lime freeze,” sort of a cross between a shake and a float. On the savory front, this place offers lots of fresh seafood, including fish of the day, pink shrimp, Florida lobster, and, during our visit, Florida stone crab claws, and local hogfish.

Alternatively: On the restaurant front, we’ve heard good things about the KLP at Key West’s Roof Top Cafe (308 Front St., map) as well as that at Blue Heaven (729 Thomas St., map), where a towering peak of meringue provides the topper. An interesting (and nontraditional) on-the-go twist is the dark chocolate-dipped key lime pie on a stick sold around town. Look for a street peddler or stop by one of Key West Key Lime Pie Co.’s locations (including 1108-C Duval St., map).