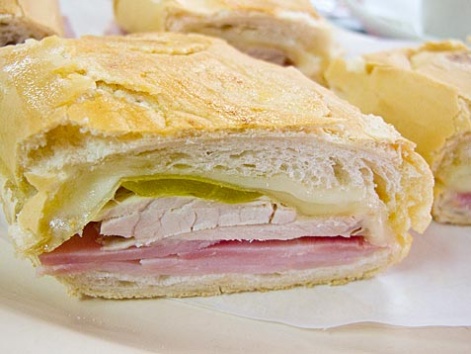 Ah, the famous Cuban sandwich—a beloved twist on a ham and cheese sandwich, made of ham, roasted pork, Swiss cheese, and pickle, hot-pressed between lightly buttered Cuban bread, which gives it a pleasant panino-like crunch. But this simple, well-known sandwich has very murky origins. Thrillist reports the earliest version of the Cuban sandwich dates back to the Taíno tribe some 500 years ago, with bread and ham joining the party once the Spaniards arrived. It wasn't until the sandwich made it to Florida in the late 1800s, though, that it really soared in popularity (and was actually called a "Cuban sandwich," since it was made by Cubans outside their country).

While Tampa claims the Floridian version of the Cuban sandwich for its own (and it did likely travel there first), Miami, it seems, took the sandwich and ran with it. It's everywhere. And you really can't miss having one while you're in town.

Good to know: The Tampa Cuban sandwich adds salami to the mix.

Where: The diner-like Luis Galindo Latin American Restaurant (305-267-9995; three locations, including 898 SW 57th Ave., map) is a wonderful place for a sandwich. Belly up to the paper mats at the counter and practice your español with the friendly waitresses.

Order: The Cubano ($6.50) or the Cubano Especial ($7.50), which is slightly bigger. Crunchy, meat, satisfying. Also check out the meat dishes here, like vaca frita.