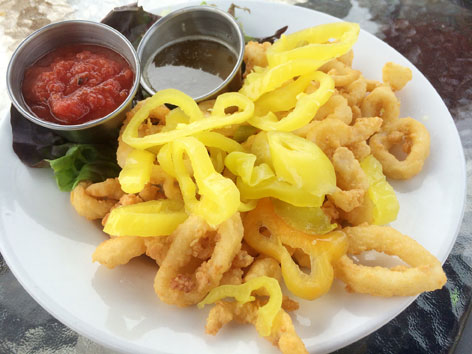 Calamari, or fried squid rings, may not be totally unique to Rhode Island, but the state does have a thing for it: In 2012, nearly 50% of the East Coast’s squid quota (23.5 million pounds) was caught here, much of it in Point Judith. Squid is plentiful, can be caught year-round, and there’s no sign of the multimillion-dollar industry slowing down: In 2014, Rhode Island’s romance with calamari was cemented in 2014 when legislation was passed deeming it the official state appetizer.

There is also, of course, a typical Rhody way of preparing it: rings of sliced squid and its tentacles, breaded and pan-fried, then served with hot peppers (traditionally banana peppers or pepperoncino) and a garlic-butter sauce. Marinara or cocktail sauce is sometimes offered as well. This is not the only way you’ll find calamari offered around here, but it is how you should try it—trust us.

Where: We wanted to enjoy our calamari with sea breezes, and the patio overlooking Nanaquacket pond at Evelyn’s Drive-In (2335 Main Rd., Tiverton, map), in Tiverton, didn’t disappoint. The four-decade-old restaurant also offers an air-conditioned indoor dining space and a covered picnic-table area for takeout customers.

Order: The calamari ($11.99) was spot on here, boasting a light, crispy golden fry and lots of flavor from the banana peppers and garlic-herb butter sauce; cocktail sauce also joined the party and was a welcomed guest. The squid was actually from New Bedford, Massachusetts—the next state over, but less than 20 miles away (a lot closer to Tiverton than Point Judith, even). These disappeared quickly. If you want to try some other RI icons, get the stuffies, the Rhode Island clam chowder with clam cakes, local littlenecks in spicy garlic sauce—and, if you dare, the elusive chow mein sandwich or platter (famously available here with lobster).

Alternatively: It’s not too difficult to track this down. In Providence, we’ve heard great things about the real-deal Rhode Island-style calamari at Hemenway’s (121 S. Main St., map); in Cranston, the specimen at historic Twin Oaks (100 Sabra St., map) is a classic (“Pt. Judith calamari a la Mama”); and in Warwick, try Iron Works Restaurant (697 Jefferson Blvd., map), where crispy Point Judith calamari are among the appetizers.