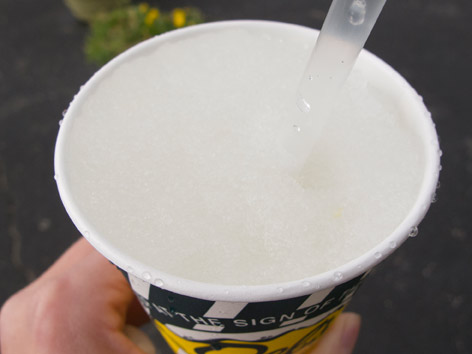 To an outsider, it’s a simple sweet, refreshing frozen lemonade. But to a Rhode Islander, it’s much more than that: a 65-year-old local tradition and onetime contender for official state drink (it lost to coffee milk), a lasting legacy of the state’s Italian heritage, a nostalgia-ridden icon of the Rhode Island summer.

Founded in Cranston in 1948 by one Angelo DeLucia—whose grandfather reportedly developed the recipe in Naples and whose father brought it to America at the turn of the century—Del’s Lemonade has since grown into an international franchise. Not bad for a little lemonade stand.

Where: While you can find Del’s in other states and even countries now, there's a little something lost when you're not pulling over under the big lemon sign in its home state, or even its home city. We hit up the roadside Del’s in Cranston (401-463-6190; 1260 Oaklawn Ave., map).

When: This branch is open seasonally, depending on the weather (generally March or April till October); hours vary too, so it’s best to call ahead.

Order: A classic lemon (from $1.25), or a "light lemon" if you want it without the high-fructose corn syrup (unfortunately, the original recipe from Italy—local lemons, snow, and sugar—has been globalized as well). There are other flavors to try too, from watermelon to mango/peach. The original lemon hits the spot, if it's sweet and tart and slushy you're after.