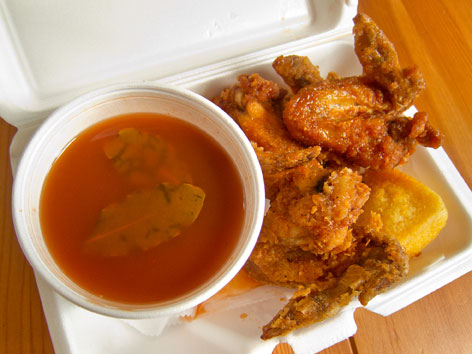 What: Fried chicken is fried chicken, but mumbo sauce (also spelled mambo, mombo, and a few other ways) is a true D.C. oddity…except that it was actually invented in Chicago first (more on that later). Varieties abound, but it is generally a reddish-orange condiment with a taste like a sweet and tangy BBQ sauce, or perhaps Chinese sweet-and-sour or duck sauce with a dash of ketchup—there are definitely sweet notes and vinegary notes, and often it’s spicy too.

In D.C. its roots are totally murky and hotly contested, but it is likely African-American first, and Chinese second—it probably originated at African-American-owned wing shops in the 1960s (a now-closed place called Wings ‘N Things on 7th St. and Florida Ave NW is often cited) before being widely adopted by area Chinese takeout joints, where it remains a fixture today.

Truth be told, it goes damn well with fried chicken wings and egg rolls alike, so the crossover makes sense. Nowadays you can find mumbo sauce at public markets and even high-end restaurants, but it’s still the rightful domain of divey takeout shops, African-American or Chinese—and it still goes best with wings.

Good to know: No one outside of D.C.—in fact many D.C. residents even—will have ever heard of mumbo sauce…unless they’re from Chicago, as a sweet BBQ sauce called Mumbo has been made and bottled there since the 1950s, the creation of an African-American named Argia B. Collins, Sr. (source here). It is a registered trademarked, in fact, and the bottled sauce can be ordered online. It’s not clear how the sauce traveled to D.C., but somehow it did, finding new life among the city’s African-American population.

Where: We wanted to get back to the roots of the stuff in D.C., so we headed to Henry’s Soul Café (multiple locations including 1704 U St. NW, map), a local treasure born in 1968 that emphasizes cooked-to-order food. Henry’s is particularly beloved for its sweet potato pie, with entrees running the gamut of fried whiting and wings to meatloaf and mac and cheese. Mumbo sauce is a staple here.

Order: Pictured are four wings in mumbo sauce, with a small, moist square ofcornbread ($3.95). The chicken was pretty tasty, meaty with a nice crispy skin, and the red sauce was pleasant, just like a sweet BBQ sauce with a slightly syrupy consistency—not really spicy here—that definitely complemented the fried wings. (The U St. staff was kind enough to give us an extra cup of it on the side; a bay leaf floated languidly on top.) There’s not much to this stuff; it’s a fun flavorful condiment at the end of the day, but you’ll know you’re in D.C. when you’re eating it. (Yes, we tried the sweet potato pie, too, which was good but insanely sweet.)

Alternatively: If we’d had time to try the Chinese contingent, we would have gone for some wings in mumbo sauce over fried rice at Yum’s II Carryout near Logan Circle (202-232-5608; 1413 14th St. NW, map), a popular entrant in that field. At historic Eastern Market, we were happy to spot a stall called Market Poultry (202-543-7470; 225 7th St. SE, map) selling Capital City Mumbo Sauce—available both sweet and sweet and spicy (we preferred the latter). Look for it at other local retailers around D.C., too—it makes a great souvenir.