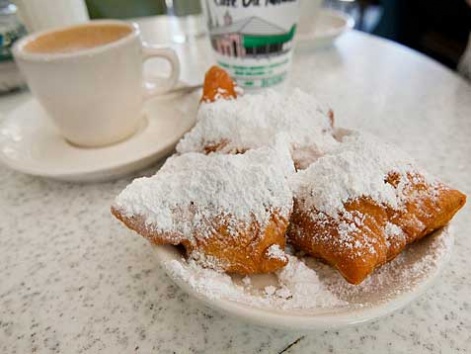 What: These square, fried, French-style doughnuts were introduced to Louisiana by the French-Acadians (a.k.a. Cajuns) once upon a time; they’re served hot and not so much dusted with powdered sugar as piled with it. These are among the cheapest, sweetest pleasures to be had in town, and work equally well for breakfast as for dessert.

Good to know: The French who settled in Acadia, today’s Nova Scotia, were called Acadians; when the British unkindly kicked them out in 1755, many wound up, after years of hardship, in southern Louisiana, where they became known (in English) as Cajuns.

Where: The giant, open-air Café du Monde (800 Decatur St., map) in the French Quarter is the quintessential place to eat beignets. It’s been around since 1862 (in smaller form, no doubt), it’s open 24 hours, and it serves only coffee and beignets (aside from sodas, milk, and orange juice). Of course, it’s also swarmed by tourists much of the day, but the line moves pretty quickly. Keep in mind that black clothes and powdered sugar don’t mix well.

When: 24 hours/7 days (closes for Christmas and “bad” hurricanes only). Come during an off hour (not in the morning or a weekend afternoon) to avoid the big crowds.

Order: At least one order of beignets (three for $2.65) with a café au lait ($2.65 for small). The coffee here is dark-roasted and chicory-spiked: smooth, strong, and delicious.

Good to know: After a few well-spent hours bar-hopping among the music clubs of Frenchmen Street, a short walk away, a late-night beignet snack is ridiculously satisfying.

Alternatively: While we think Café du Monde is great, some people are turned off by its tourist-attraction status. If you want to check out another spot, there’s Café Beignet (multiple locations including 311 Bourbon St., map), also in the Quarter, serving a full breakfast and lunch menu. Even better, if you can drive yourself to nearby Metairie, try the reputedly awesome beignets at 24-hour Morning Call Coffee Stand (3325 Severn Ave., Metairie, map), which lived on Decatur Street for 100 years before moving to its present location in 1974.