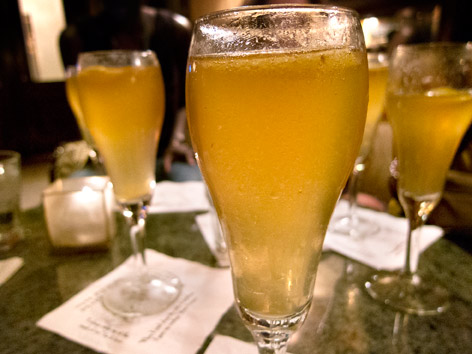 What: Champagne, cognac or gin (either can be used), sugar, lemon juice, and lemon peel join forces in the French 75, one of the city’s daintier cocktails. Named for a piece of French artillery (the 75-millimeter cannon), the drink is said to have originated in Paris in 1915, but—like the Pimm’s Cup and the Bloody Mary—it is one that New Orleans has wholeheartedly adopted as its own, owing perhaps to its French background. It’s a wonderfully festive, elegant drink.

Where: Any cocktail bar worth its salt can make this, but why not head to Arnaud’s French 75 (813 Bienville St., map) cigar bar for your French 75? Located next to Arnaud’s historic dining room in the French Quarter, the speakeasy-style bar, with its golden lighting and vintage décor, transports you to another era.

Order: The French 75 ($13.75) here uses Courvoisier VS and a fat slice of lemon peel, combining with the champagne to deliciously heady, citrusy, effervescent effect. (Arnaud’s claims that gin is incorrectly used in the drink elsewhere.) It ain’t cheap, but one should serve you well.

Alternatively: We imagine the other classic cocktail bars around town, like Sazerac Bar (123 Baronne St., map) in the CBD’s renovated Roosevelt Hotel and the rotating Carousel Bar (214 Royale St., map) in the French Quarter’s Hotel Monteleone, would also be lovely places for a French 75. In fact, both of those bars use gin in their French 75s, so perhaps a taste test—cognac vs. gin—is in order!