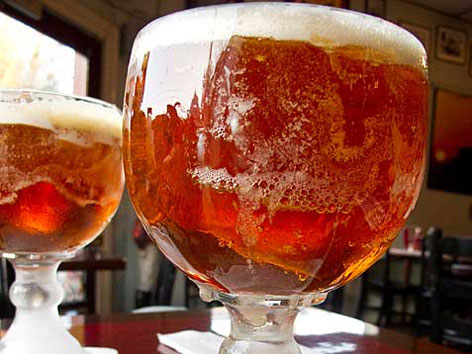 What: New Orleans has a long tradition of beer brewing (at one time there were some 30 breweries in town) that nearly completely died out after Prohibition, but the craft is making a comeback. So between all the unique cocktails here, don’t overlook beers from local breweries like Abita, Covington Brewhouse, and NOLA Brewing Company (note: production of Dixie Brewing’s beers has been based in Wisconsin since Hurricane Katrina).

Located across Lake Pontchartrain in Abita Springs, about 40 miles from the French Quarter, Abita, the Southeast’s oldest (since 1986) and largest craft brewery, is by far the most prevalent local beer, found in just about every NOLA bar or restaurant. The easy-drinking Amber lager is especially common, though we prefer the darker, richer Turbodog (fruit lovers, try the Purple Haze raspberry wheat beer). Keep an eye out for Abita’s seasonal harvest beers, like Pecan Harvest and Satsuma Wit, which incorporate Louisiana-grown ingredients. Near Abita’s digs, in Covington, Covington Brewhouse (formerly Heiner Brau) specializes in Bavarian beer styles, like Maibock, Kölsch, and seasonals including Oktoberfest. New Orleans-based newcomer NOLA Brewing Company (NOLA = New Orleans Lager & Ale) has a small but fine selection of malt beers, such as the appropriately hoppy Hopitoulas IPA and the earthy farmhouse ale-style summer seasonal, Hurricane Saison.

Where: Abita and Covington Brewhouse offer regularly scheduled tours, but you’ll need a car (and about 50 minutes) to reach them. Easier to visit is NOLA Brewing Company (3001 Tchoupitoulas St., map), located within city limits in the Irish Channel neighborhood; free tours run every Friday at 2pm. As far as bars and restaurants go, you won’t have trouble finding Abita in the city; we enjoyed the frosty Ambers, pictured, at Liuzza’s By the Track (1518 N. Lopez St., map). (Yeah, yeah, we know: Frosted glasses dilute your beer. But Amber is relatively light-bodied as it is, and we couldn’t resist on a hot day.)

Good to know: Abita donates 75 cents of every bottle sold of its unfiltered Weizen Pils, Save Our Shores (S.O.S.), to its own charitable fund of the same name, which is dedicated to ongoing oil-spill relief efforts in the Gulf.

More beer bars: The hands-down best bar in NOLA for craft beer—local and otherwise—is the Avenue Pub (1732 St. Charles Ave., map) in the Lower Garden District, an easy ride from the FQ on the St. Charles streetcar. Housed in a cool old bi-level balconied space, Avenue rotates between 32 and 47 beers on tap (always with several from Abita and NOLA Brewing, among other regionals like Arnaudville’s Bayou Teche and Mississippi’s Lazy Magnolia), taps a new cask every Friday, and is open 24 hours—repeat, 24 hours—a day. Other great beer bars are NYC transplant d.b.a. (618 Frenchmen St., map), located just outside the Quarter in the Marigny neighborhood, and Cooter Brown’s Tavern & Oyster Bar (509 S. Carrollton Ave., map) Uptown, where you’ll find some 400 beer offerings, including regionals. We also like the Maple Leaf Bar (8316 Oak St., map) Uptown; it usually has some good local beers on tap. Within the French Quarter itself, try St. Lawrence (219 N. Peters St., map), a great beer bar that is also our pick for frozen artisanal daiquiris.

Also good to know: New Orleans has two operating brewpubs: the somewhat touristy Crescent City Brewhouse (527 Decatur St., map) in the French Quarter and chain pub Gordon Biersch (200 Poydras St., map) in the CBD, near the Harrah’s Casino. Not our favorites, but they can be fun if you want to try samplers of house-made brews.